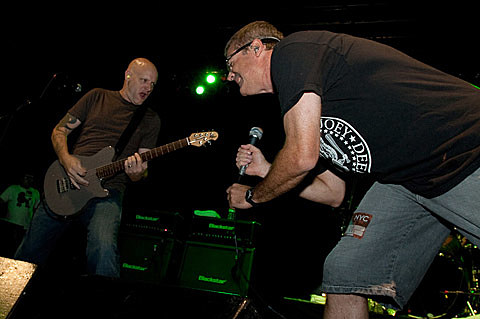 It began in Chicago, expanded to Philadelphia last year, and Brooklyn, Toronto and Dallas will get a Riot Fest of its own. The Brooklyn one happens September 8 at Williamsburg Park, yet another big show for the new outdoor venue. The lineup includes Descendents (!!), Hot Water Music, Gogol Bordello,The Bronx, Screaming Females, The Menzingers, and Larry and His Flask. Tickets go on sale Friday, June 15 at noon with a presale starting Thursday (6/14) at 10AM (pw: RIOT). Flyer for Riot Fest Brooklyn is below.

The Desecendents playing is of course the biggest news, as their only other NYC reuinon show so far was at Roseland last September. As for the rest of the line-up, it's nice to see Screaming Females will be back in action after canceling dates recently; Hot Water Music just released their first album in eight years (see pics from their Bamboozle performance); and check out Gogol Bordello pics from their recent show at Wellmont. and pics from The Bronx's Bell House show with Off!

The Dallas Riot Fest is September 22 with Rise Against, Descendents, NOFX, The Gaslight Anthem, Less Than Jake, Andrew W.K., The Sword, Municipal Waste, Teenage Bottlerocket, Off With Their Heads, Messengers, The News Can Wait, Fever Dreamer, Mouth Of The South, The American Heist, Venomus Mansions and Not In The Face.

And the Philly Riot Fest is July 19  with The Promise Ring, August Burns Red, Boy Sets Fire, Gameface, Hirs, Refused, Off!, and more. 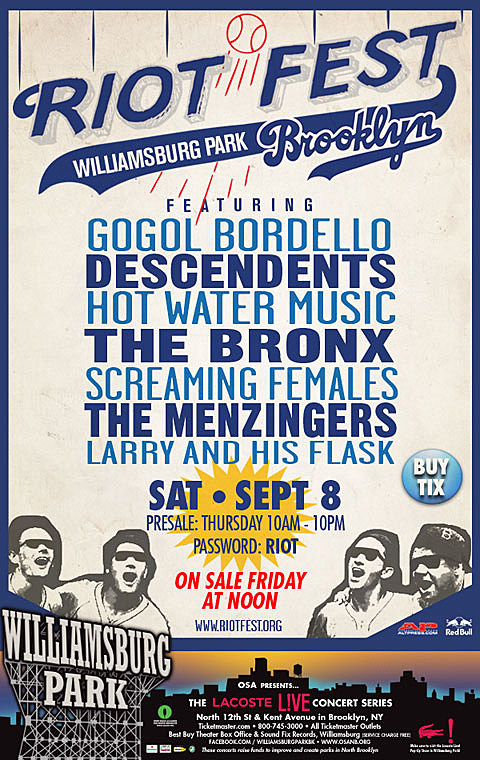