The Frogs, Dennis on the left 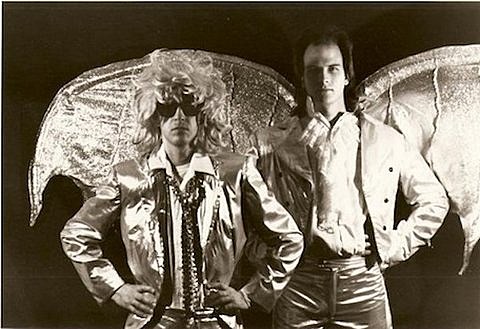 WIND LAKE -- Rescue crews recovered the body of Dennis Flemion Tuesday, July 10th. Flemion did not resurface after jumping from a pontoon boat in Wind Lake on Saturday, July 7th.

Authorities say 57-year-old Flemion was at Wind Lake for a family gathering on July 7th when he jumped off a pontoon boat and into the lake without a life-jacket on.

Authorities say Flemion was a good swimmer and knew the lake well. [6NewsNow]

R.I.P. Dennis. The Frogs were one of the strangest bands of the late '80s and '90s and anyone who saw them live will never forget it. (Check out a clip of Andy Richter describing a Frogs' show on Conan O'Brien from 1997 below.) Gerard Cosloy of Matador Records, who released their 1996's My Daughter the Broad, posted some recollections on Matablog:

While I'd hate to put too much focus on just one part of the Frogs oeuvre, the initial 'Made Up Songs' cassettes (the first couple of which constituted the bulk of 'It's Only Right & Natural' as well as the subsequent Matador LP, 'My Daughter The Broad') were probably played in my home, car, head, as much as any music recorded before or since. There was certainly a stretch of my life in the late 1980′s in which you were not leaving my apartment if you hadn't heard "I've Done Drugs (Out Of The Mist)" at least once. I suspect there's others who have similar stories. There are few "what the fuck was that?" moments in music that quite compare to someone's reaction the first time you play them The Frogs.

Dennis was without question, one of the funniest persons I've ever encountered. Painfully so. It would not be an exaggeration to say there were several times in which his verbal evisceration chops were almost impossible to keep up with (those who've attended Frogs shows over the years know exactly what I'm talking about).

There's a couple of new Frogs albums that came out last week on iTunes ; 'Squirrel Bunny Juniper Deluxe' and 'Count Yer Blessingz'. The Dennis that we saw onstage would've recognized this tragic event as a huge opportunity to plug some new recordings. Sans wig, drum sticks, etc. he might've preferred I'd not even mention it. The fantastic output and fleeting moments of near-fame aside, I hope he's remembered as a really sweet guy first, and a hugely talented artist second. Our thoughts go out to Jimmy, the rest of the Flemion family, their friends and everyone who was lucky enough to know Dennis. Simply saying, "he'll be missed" doesn't come close to covering it.

You can stream the 'Made Up Songs' cassettes via Spotify widgets below.