Blacklisted at Cake Shop in 2010 (more by Brian Reilly) 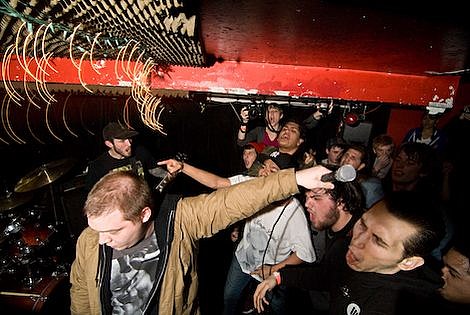 Boston hardcore traditionalists The Rival Mob, Philly boundary pushers Blacklisted, World War 4 (fronted by Mark Porter of NJHC band Floorpunch, plus other members of that band, The Rival Mob, and more), and Wilkes-Barre straightedge band Stick Together (whose lineup includes Ned Russin of Title Fight, plus members of War Hungry and Bad Seed) all played This Is Hardcore in Philly last year, and they'll soon team back up for what will be a very solid quadruple bill in NYC on June 7 at Le Poisson Rouge (co-presented by Hardcore Gig Volume and Noisey). Tickets for that show are on sale now.

Le Poisson Rouge still feels like a weird location for hardcore shows, but they do happen there. In fact, as previously discussed, two will happen there this month as part of the second annual New York's Alright (which Rival Mob played last year). This year's shows at LPR include Inmates, Anasazi, Omegas, Proxy, Warthog and Mercenary on 4/18 (tickets), and Infernoh, Crazy Spirit, Gas Rag, Wiccans, Stoic Violence, and Murderer on 4/19 (tickets). You can check out the lineups for other NY's Alright shows here.

Meanwhile, even sooner than that is Damaged City Fest in DC this weekend (4/11 & 4/12), which The Rival Mob also play, in addition to Infest, Los Crudos, Boston Strangler, Priests, Good Throb, Coke Bust and more.

And speaking of This Is Hardcore, the 2014 lineup for the Philly festival was recently announced, including Converge, Title Fight, Blacklisted, Bl'ast, Code Orange Kids, Nails, Full of Hell and many more. This year's fest happens from July 24-27 and tickets for that go on sale Saturday (4/12).

Stream some Rival Mob, Blacklisted (and Harm Wulf), World War 4 and Stick Together below...

Blacklisted - "Our Apartment Is Always Empty"

Stick Together at This Is Hardcore 2012