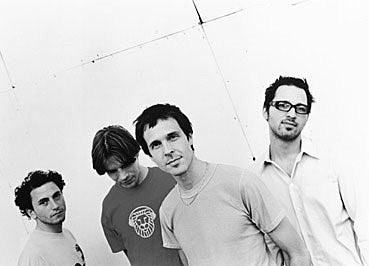 Walter Schriefels' short-lived post-Quicksand project, Rival Schools, have reunited to record some new tunes and lined up a seven date tour of the UK leading up to an appearance at the Hove Festival in Norway. Here's Walter from an interview posted @ RockSound:

"We have got this June tour and we still want to play some shows in the States. Especially if we are writing new songs it would be good to live in them a little onstage before we come to record anything. Whether the album is out first part of the year or spring we are not yet sure but we want to play out with new material to test it all out so expect a few more dates to be announced."

Awesome..... US dates are comin'! Full tour dates, most history and videos below.....

Formed by Schreifels, frontman of the highly-influential Quicksand, Rival Schools were a hardcore 'supergroup' - its members being alumni of such '80s and '90s hardcore bands as Gorilla Biscuits (Schreifels), CIV (Siegler), Youth of Today (Schreifels and Siegler) and Iceburn (Tolman).

Rival Schools released their only album, United By Fate, in 2001, spawning two music videos (below) before finally breaking up in 2003. I think it's also worth mentioning that Siegler did time in Gorilla Biscuits (at age 12!!!) and played with Judge and Glassjaw as well... so Rival Schools truly was built from hardcore royalty.

First the Gorilla Biscuits reunion, now this. Howsabout putting one more band back together Walter!

Quicksand - "Thorn In My Side" video