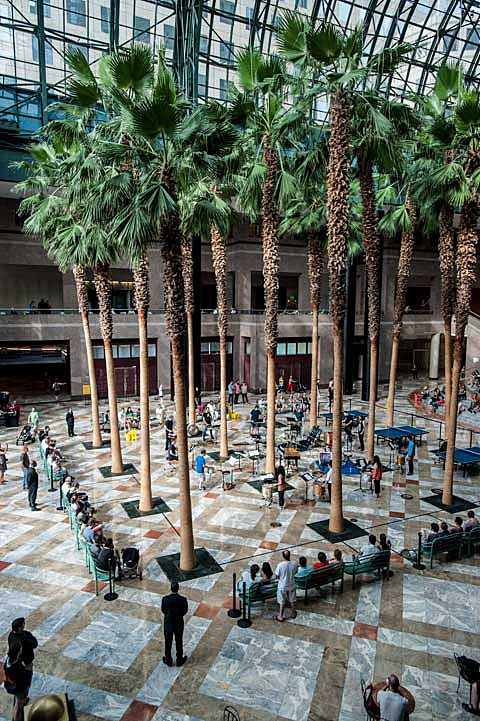 The free River to River Festival returns in 2015 to various outdoor NYC venues from June 18-28 and includes music, dance, theater, visual art, film and more. Some highlights this year include the annual Bang on a Can Marathon which happens June 21 at Winter Garden at Brookfield Place as well as shows with Olga Bell, Roomful of Teeth, and more. River to River kicks off with the R2R Bash at Battery Park City's North End Way on June 18, featuring a performance by East African vocalist Somi.

Dates, times and locations subject to change--be sure to check www.RiverToRiverNYC.com for up-to-date information. Please note that all events are free, but due to limited capacity some require advance RSVPs. All RSVPs open in June.

Join River To River artists, partners and friends for a "block party" style event on North End Way to help kick off the 14th annual Festival! Enjoy discounts at area restaurants and retailers, performances by acclaimed East African vocalist Somi and activities for the whole family.

The 1980s through the early 1990s represent a time of extremes--socially, politically and artistically. While not attempting to be a survey, Public Intervention & Performance in Lower Manhattan presents a snapshot of a time and place where a diverse group of artists were simultaneously making work. The exhibition looks at artists' varied--but invariably strong--responses to the overall political climate, the HIV/AIDS crisis, civil rights violations, the changing public sphere and the impact of newly pervasive media through public art, intervention and performance specifically in Lower Manhattan. This time period saw the institutionally-supported erection of large-scale public sculpture like Richard Serra's Tilted Arc and T.W.U. as well as the claiming and reclaiming of public space by artists like Keith Haring with his drawings and Jenny Holzer wheat pasting her Inflammatory Essays on the streets and in subways stations throughout Manhattan.

Dance My Life is a new solo performance with live music celebrating family, friends and other "important things."

A spectacle in three acts, Court/Garden is a dance and live music performance by a canary torsi. It takes as its inspiration the imperial ballets of Louis XIV's French Court, the spectatorship of the proscenium stage and the presentation of video feeds as cultural, social and political frames of experience. The a canary torsi team will adapt the piece, which originally premiered at Danspace Project in 2014, for the public environment of Federal Hall for River To River 2015.

In advance of River To River, LMCC will present an Open Studio in-process showing with a canary torsi on May 23. See lmcc.net for details.

TWYLA THARP
THE ONE HUNDREDS
June 20 at 7pm
Nelson A. Rockefeller Park (Battery Park City)
Co-presented with The Joyce Theater

Choreographer Twyla Tharp's expansive career encompasses modern dance, ballet, Broadway, film and television--not to mention acclaimed work as an author. Her ensemble is currently celebrating 50 years of her choreography and will perform her seminal work, The One Hundreds (premiered August 1, 1970), in Rockefeller Park as part of River To River 2015.

The One Hundreds masterfully fuses math, movement and public participation. During Sandy Koufax's legendary season, Tharp noticed that each baseball play took approximately 11 seconds and began crafting her own 11-second phrases. The first part of the piece features two dancers performing 100 of these phrases, without music, in perfect unison. Five dancers then join them and each performs 20 different phrases simultaneously. Finally, 100 "community members" join in, each performing one of the phrases and completing the material in 11 seconds.

Bang on a Can returns to the Winter Garden at Brookfield Place with its annual incomparable super-mix of boundary-busting music from around the corner and around the world! The 2015 Bang on a Can Marathon will feature 10 hours of rare performances by some of the most innovative musicians of our time side-by-side with some of today's most pioneering young artists.

In Trisha Brown: In Plain Site the audience experiences Brownʼs work from a fresh perspective with programs curated to spaces. Phrase material Brown used in her creative process, along with the Early Works and Equipment Pieces, is reframed and released from the proscenium, creating an intimate relationship with the audience. These assembled site-specific programs provide a new lens to look at Brown's vast span of work, demystifying the complexity through special dialogue and audience intimacy.

Eiko Otake presents the next iteration of her ongoing solo project, A Body in Places, which took place inside Philadelphia's 30th Street Train Station in the fall of 2014. Central to the project is a drive to explore non-traditional venues and to respond to the innate characteristics of each specific place. At the core of each variant is Eiko alone exploring solitude, intimacy, gaze--and specifically how the fragility of the body within public places mutually affects and is affected by the gaze of passersby. Eiko began investigating her solo practice during River To River 2014 and LMCC plans to continue presenting her work in River To River 2016.

Premiered to a sold-out Walker Art Center in February and released as an album by New Amsterdam Records and One Little Indian in April, Russian-American composer (and member of Nothankyou and the Dirty Projectors) Olga Bell's dreamy and surreal KRAI is scored for cello, electric guitar, bass, pitched drums, mallet percussion and electronics, and features a vocal ensemble of six Olgas--four female and two "male."

Krai (край) is the Russian word for edge, limit, frontier or hinterland. Present-day Russia is divided into myriad "federal subjects," including nine krais. In this capacity the term is a political designation, like "territory," but for the earliest Russians these places represented both the promise and terror of the vast unknown. While much has been written about Russia's major cities, Bell's KRAI is concerned with the rest of the map: the wilderness, the towns, the inhabitants and their stories.

R2R Living Rooms give artists, partners and audiences an opportunity to come together, socialize, dance, experience after-hours programming and discuss/absorb the River To River offerings they've experienced during the day.

LMCC Workspace artists-in-residence Amy Khoshbin and Raja Feather Kelly reemerge as CAN-D (Amy) and DRELLA (Raja) to host and perform a fun evening of performance art influenced by media and celebrity culture that features rapping about pop-culture, performing contemporary dance and other surprises.

The Set Up is an eight-part dance series made by choreographers Wally Cardona and Jennifer Lacey and an international assembly of eight master dance-artists of a traditional form. This sixth installment of The Set Up began in Mandalay, Myanmar, with Saya Lei (aka U Than Aung), a 70-year-old master who has devoted his life to preserving the Mandalay-style of Burmese classical dance. Original sound score by Jonathan Bepler.

In White, Boulé borrows from quantum physics to investigate the non-localized resonance of movement and the ability of consciousness to collapse matter into momentary potential, exploring the invisible architectures created by movement and choreographic form. The dancers' material bodies become tools for transmitting the immaterial (information that is beyond what is immediately perceivable through the 5 senses), and dance is treated like sound in its ability to travel across a space. All aspects of the work (hairdos, costumes, color, patterns, fractals and text) are carefully brought together to create a harmonic and resonant field.

Founded in 2009 by Brad Wells, Roomful of Teeth is a Brooklyn-based, Grammy-winning vocal project dedicated to mining the expressive potential of the human voice. Through study with masters from non-classical traditions the world over, the eight-voice ensemble continually expands its vocabulary of singing techniques and, through an ongoing commissioning project, invites today's brightest composers to create a new repertoire without borders.

For River To River 2015, the group will perform Pulitzer Prize-winning composer Caroline Shaw's Ritornello, Wally Gunn's The Ascendant and selections from their upcoming album, Render, out April 28 on New Amsterdam Records.

John Kelly's Love of a Poet received accolades and an Obie Award for its premiere in 1990 at Lower Manhattan's Battery Maritime Building, the current terminal for ferries to and from Governors Island. For River To River 2015 Kelly is re-constructing the work for the Arts Center at Governors Island. The site-specific work incorporates Robert Schumann's 1840 Dichterliebe song cycle, sung by Kelly in the countertenor register, and includes the original black-and-white 16mm film sequences by Anthony Chase as well as a completely new set/installation by artist Jarrod Beck.

Poets House presents the 23rd annual Poets House Showcase, a free exhibit featuring all of the new poetry books and poetry-related texts published in the United States in a single year from over 650 commercial, university and independent presses. This diverse and inclusive exhibition will be on view throughout the summer.

SARAH MICHELSON
3 AFTER 4, EXPERIMENT 4
June 25-26 at 7pm
Location to be announced

3 after 4, experiment 4 is a continuation of Michelson's award-winning works that have been performed in venerable institutions including the Whitney Museum, MoMA, Walker Arts Center and more. Michelson continues her exploration and questioning of what dance is, how to create a dance and the history of dance form. Her performance is often intensely physical and develops from a rigorous formal structure.

Begun in 2012, Fall of the Rebel Angels is an ongoing series of performance "studies," with each chapter created for different casts and different sites. This approach mirrors Rubens' own process: for every painting he would sketch several "studies" in pen and ink or charcoal. X is the tenth iteration of Fall of the Rebel Angels, and will combine content generated for previous studies with new scenes inspired by the Nolan Park former military housing units on Governors Island.

Cribles/Wild, originally premiered outdoors in 2010, is a "May Pole" dance with ten local choreographed dancers exploring the round--a simple, archaic form that so often serves as a vehicle for celebrations, rites and rituals. Performed to Iannis Xenakis' Persephassa for six percussionists, the piece makes powerful use of the composers' spatial architectures and ultimately wonders whether we can see music and hear dance.

Join LMCC and River To River for Open Studios with Process Space artists-in-residence at Governors Island. Visit with visual and performing artists and writers who have been working in the Arts Center at Governors Island since March. The weekend will feature behind-the-scenes access to 20 multi-disciplinary artists' studios.

A discussion between two internationally lauded choreographers in anticipation of their upcoming collaboration. Eiko and Emmanuelle may discuss individuals who have influenced their work, their respective current challenges and inspirations and identities as Vietnamese/French and Japanese/American women, as well as their personal transformations and approaches to performing, choreographing, and teaching dance.

A discussion exploring how Cardona and Bepler's creative processes and motivations led to the protocols used in the cross-cultural installments of The Set Up and how both hold space for the ambiguities and discoveries inherent in working with differing cultural imprints and placements. As an independent researcher, Yamauchi is participating in the process of "discussing/doing/dancing" and examining how the The Set Up and its creators are "undoing tendencies toward certainty in art."

This concert in the Seaport brings together some of New York's finest artists with roots around the world and around the corner. Come hear sounds of the City from Mali to Venezuela to the Balkans and beyond mixing modern and traditional music in surprising, danceable ways.

Brooklyn born and raised music curator Isabel Soffer of Live Sounds has been at the forefront of the global music scene in the U.S. since its formative years. Immersed in music that is deeply based in tradition but travels in innovative directions, she digs deep to find border-crossing artists that stay true to their roots.

Klezmer influenced punk/rock band Golem is known for its virtuosic musicianship, theatricality, humor and fearless wild energy, combined with a boundless love of tradition. Golem is clearly "not your grandparents' klezmer." (NPR)

In the Bamana language of Mali, Benyoro means meeting place, and that's exactly what this group is. It's about the meeting of traditional and modern instruments, Malian and American musicians, centuries-old songs and modern arrangements. The band's unique sound packs dance floors wherever they go, celebrating the communal and universal nature of West African sounds.