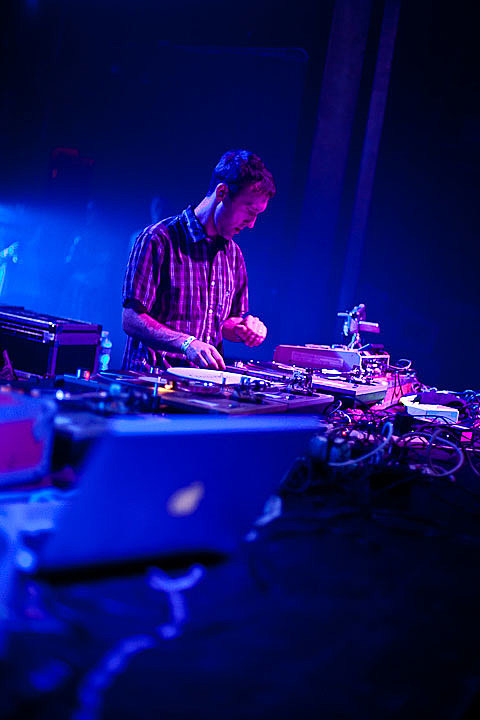 The Glitch Mob, Phantogram, and RJD2 will team up to play Terminal 5 on July 22nd. Tickets go on AmEx presale on Wed, 3/23 at noon, and regular sale on Friday.

No word on whether RJD2 will also perform material as part of his alter ego, The Insane Warrior, who released a debut LP called We Are The Doorways last month.

"A strictly instrumental affair, the album "We Are The Doorways" was loosely inspired by horror and sci-fi film scores of the wonderfully fruitful period of 1976-1984. Several things mark this record - for one, there is a departure from the concise nature of most modern pop-oriented records. Expansive, open passages - often with no rhythmic elements - recall the work of both Eno and John Carpenter. These give way to spastic outbursts of energy in places. At other times, the tension-meets-groove aesthetic of Dario Argento's pet Goblin give birth to some surprisingly funky cuts as well."

Stream that LP below, and head to the bandcamp page to learn how you can submit your own "visual or audible companion to any of the tracks."

RJD2, who also plays Camp Bisco in July, was just down at SXSW (as was Phantogram) but only played a single show which was with Chiddy Bang on 3/15 at The Belmont in Austin (Chiddy Bang also played the BV/Feed The Beat party at Emo's the next day). Videos from the Windows Phone-sponsored SXSW Interactive shindig can be watched below.

In related news, RJD2 is part of a new DJ Hero 2 "indie hip hop" bonus pack that is out now and also features Jaylib, Charisma & Peanut Butter Wolf, The Perceptionists, and Atmosphere.

The Glitch Mob, who will be at Ultra Music Festival in Miami at the end of this month, is also confirmed for STS9's Re:Generation festival, as are STS9, Bassnectar, Beats Antique, The New Deal, Big Gigantic, Tycho, Emancipator, Little People and Lynx, and others TBA. The fest, which takes place in North Plains, Oregon's Horning's Hideout, goes down from June 23-26.

Everything mentioned above, and all known tour dates, below...

Chiddy Bang, RJD2, and Hoodie Allen Presented by BroBible.com and Windows Phone Live From Austin During SXSW 2011 from BroBible on Vimeo.