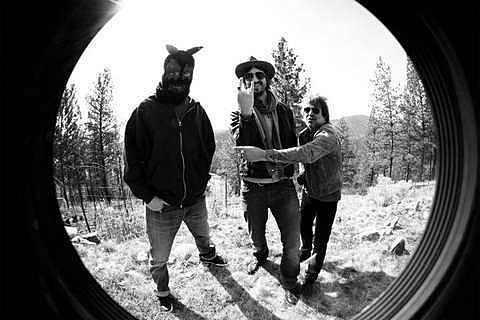 RNDM is the new project of Pearl Jam bassist Jeff Ament, singer/songwriter Joseph Arthur (who played City Winery last night [8/27]), and Seattle scene drummer Richard Stuverud, who was previously in the band Three Fish with Jeff Ament. RNDM will release an album titled Acts on October 30, and you can stream one of its tracks, "Modern Times," over at Rolling Stone.

RNDM will support their new album with a tour this November, which kicks off in Brooklyn on November 2 at Music Hall of Williamsburg and comes back to NYC on November 8 at Bowery Ballroom. Tickets for both of those shows went on sale today (8/28) at noon.

Speaking of Pearl Jam, they play Philly's Made In America Festival this weekend (9/2).

Speaking of Joseh Artuhur, he recently posted a long twitter update to the case of his van which was seized and auctioned by NYC last week. His story and a list of the equipment that was in the van, along with a list of all RNDM dates, are below.

Many of you have asked questions to clarify the debacle with my van, so here goes. Hope this answers your questions.

My purpose here isn't to throw anyone under the bus, but to clarify the situation which many have been generous to support.

There were three outstanding tickets from awhile ago on the van (not literally on the van), which I was assured were taken care of, but were not. The van was brought to a shop for repairs, which I had assumed was a relatively safe place. It had been worked on there before without incident, which is one reason I was ok with equipment and art in it.

The other reason is I live in a small place and amps eat it up pretty good. I paint a lot, so the van becomes a de facto room/storage area. It is not unusual for me to leave stuff in the van (rolls of canvas and amps, hardly ever guitars), and I keep it in gated parking.

Unbeknownst to me, while in the repair shop, it was parked on the street and towed from the (misunderstood, outstanding) parking tickets. My manager was taking care of my van, and after it was towed we had discussions about who should pay for the towing, me or the shop.

The shop agreed to cover it and that seemed a happy turn. I naturally assumed that the van was promptly retrieved from the tow yard and returned to the shop for more repairs, but it never was.

I then went to Mexico and had the time of my life. The day after I got back, I received a call from my manager saying, "I have the worst news." I thought someone had died; I was relieved when no one had, but it was still pretty horrible. It was like a nightmare getting worse when I realized what was in the van. My heart sunk and broke.

It kept getting worse when I learned I really had no rights. The van was sold and now all of the contents belonged to the new owner whom we are not allowed to know. Our only ace is that we were never warned of the sale.

It's an absurd situation and a comedy/tragedy of errors. I am plenty upset about it - at the city, at my manager, and at myself - but I am attempting to be zen and keep it in perspective.

Nobody died but, yes, it's really bizarre. There is a sense of loss and violation, but obviously people endure much, much worse every single day. I have no time for self pity and very much hope that this doesn't come off like that.

Thanks to Spencer Tunick, Ron Kuby has taken my case. He's told me that my best chance at retrieving my things is to build the story through social media, so that is why I'm still posting about this, and very grateful for those of you who are supporting my little cause.

Lord knows there are more important things in the world than a missing van with some art and amps in it. There has been a heartening outpour of support, and it has deeply been appreciated. A few lawyers are on the case and will hopefully be able to shake the law in our favor, and at least retrieve the contents of the van.

I've been told it is unlikely I'll get the van back. Everything happens for a reason. I will rise above this and one day laugh at it. Thank you all again for your enormous support. It means a lot.