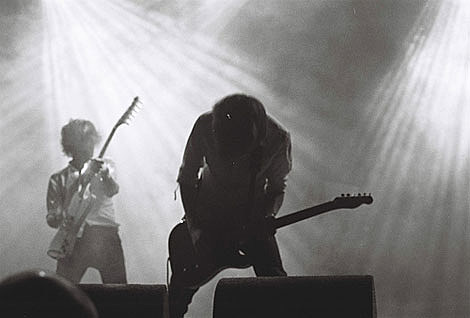 Roadburn (April 23-26th, 2009 in Tilburg, Holland) announced more bands to an already impressive festival... one that sold out in 45 minutes when tickets went on sale Saturday! Walter Hoeijmakers / Roadburn comments:

"We still can't believe that the 2009 festival sold out so quickly. It was utter mayhem when the tickets went on sale last Saturday. Many of the tickets were gone before the regular Roadburn attendees realized that sales had even started. Unfortunately, about 150 to 200 tickets are currently being sold through secondary ticket outlets for prices up to $350. We feel very badly that Roadburn can't prevent this from happening. Please be very aware that some of these scalpers may sell fake tickets."

We already knew of Neurosis and their Beyond The Pale Festival with Young Gods & A Storm Of Light, the maaajor addition of the reuniting Saint Vitus and Amon Duul II, followed by Baroness & Minsk, and then Om... but now the entire line-up has been revealed including the additions of Wolves In The Throne Room (who also played 2008 - stream that here), Ufomammut, Church Of Misery (who have a new EP and also played 2008), Burial Hex, Gnaw Their Tongues, Alexander Tucker, and many many many others. Check out the full listing below....

In a recent interview with us, Al Cisneros said not to expect Shrinebuilder at Roadburn.

Orange Goblin announced that they would record their Roadburn performance for a future live LP and are working on their new LP with Minsk's Sanford Parker (who will also be at Roadburn).