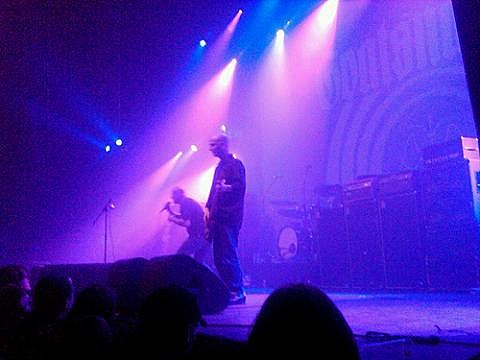 Kim Kelly knows her (good) metal, and as such, we couldn't think of a better ambassador than this Philadelphian/writer for Terrorizer/Hails & Horns/Metal Injection. Kim checks in from Roadburn (April 15-18, 2010) in Tilburg, Holland, where she will take in some of the best metal bands currently in existence (and some resurrected from the grave), reporting back on what havoc the riff, and the volcano, hath wrought... - BBG

The road to Tilburg is a very long one, indeed - at least if you're coming from the mean streets of Philadelphia. After an 8am flight from Newark that landed at Heathrow at 8pm London time (before the volcano!), a few restless hours of sleep in a hostel (where a very nice Scottish boy had acted as my human alarm clock after I discovered that both my US and UK cell phones weren't working), an hour-long bus ride to Standsted Airport (chauffeured by a rough-looking lad who spent the trip dancing in his seat to Lady Gaga and singing along under his breath), an hour flight to Eindhoven, twenty minutes on a bus to the city's central train station, forty minutes on the train to Tilburg, and a five-minute walk with my Terrorizer mates to the Grass Company cafe/weed emporium, I was finally there - the stoned Mecca that is Roadburn.

Why in the name of all that's unholy would I bother spending so much time and money (let's not even talk about that part) to get to some doom fest in the middle of the sleepy Netherlands? If you even have to ask, then you've clearly never been to Roadburn. Without even mentioning the increasingly psychotic lineups Walter, Jurgen, and the crew have managed to pull together, the atmosphere alone is worth the trip. Everyone is happy, chilled out, usually in various stages of inebriation, and incredibly welcoming; we're all in this together, no matter what you look like or what you came to see - and what you came to see is the stuff hesher wet dreams are made of. This year alone, we've got Tom G. Warrior's Triptykon, Goatsnake, Thorr's Hammer, Candlemass playing Epicus Doomicus Metallicus in its entirely, two YOB performances, John Garcia playing Kyuss, an Enslaved/Shining collaboration, a NOLA invasion from EyeHateGod, and about a million other amazing bands (that made it here despite the volcano). Roadburn is the ultimate destination for devotees of the riff and amplifier worshippers of all stripes. 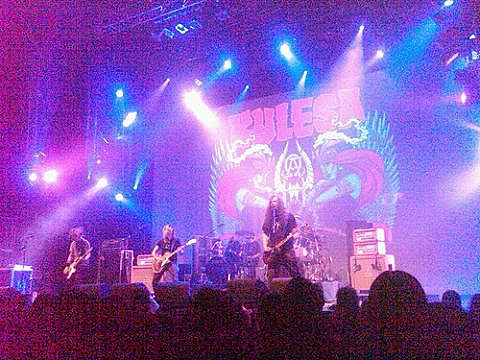 Kylesa kicked off the whole shebang at 4pm on Thursday, laying waste to an already packed crowd and owning the fuck out of the main stage. They and Dark Castle had to bounce later that night to continue their European tour, but made a definite mark - Kylesa by ruling onstage, and Dark Castle simply by ruling.

I dashed off to catch the tail end of Ancestors' psychedelic meanderings in the Green Room, then bounced right back to catch a bit of Jarboe's always stunning performance (augmented by my superbros Fade of Inswarm/Batillus, Nick of Hull, and Erik of Cobalt, who provided the best damn 'backing band' you could ask for). I had to slip away during their set to take part in a very special event. 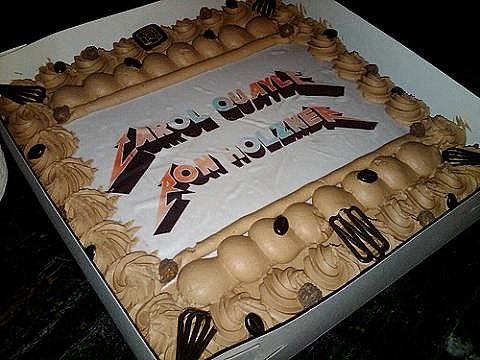 My friend Ron Holzner (ex-Trouble/Earthen Grave) had decided that Roadburn would be the perfect backdrop for his wedding, and so, with the Reverend Mike IX Williams officiating and members of EyeHateGod (plus yours truly) making up the wedding party, we celebrated the union of Ron and his beautiful new wife Carol with champagne, cake, and Black Sabbath. Definitely a little surreal, but the most rock'n'roll wedding imaginable - and the emotion was all real.

After lots of hugging and pictures, I ran off to catch The Wounded Kings upstairs in the Bat Cave, which was unimaginably crowded but totally worth fighting my way to the front for. The British doom crew's latest album, The Shadow Over Atlantis, is one of the best records you'll ever hear, and the band managed to faithfully recreate the brilliance live. I could have watched them for hours, but had to be satisfied with two songs and promises of a US tour as soon as they can manage it.

YOB had already started playing by the time I fought my way back downstairs, but I got to see about half of their set, which was every bit as awesome as you'd expect (if a bit less powerful - blame the sound guy for that, though). They'll playing again on Sunday (!) so I'll have plenty more to say about them later. 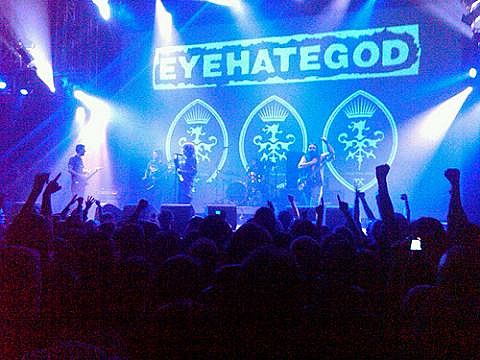 The main event, as far as I was concerned, was EyeHateGod. They NOLA doomsayers were PERFECT - that is to say, blessedly imperfect and perpetually in their own little world. Those goddamn gargantuan riffs were punctuated by "Man, what song we playin' next?", Mike IX's trademark foul-mouthed stage rants, and lots of grins between the band as they muddled their way through a fangirl-approved set of their greatest (bong) hits. The sound guy didn't seem to know what to do with the mighty EHG; Bower's guitar was deafening, while you had to strain to catch Mike's raw-throated vocals and there were a couple technical difficulties that were resolved with typical EHG nonchalance, but these minor snags did nothing to diminish the power and the glory of their performance. So fucking good. If you don't catch them on their upcoming US tour, you're an idiot.

EyeHateGod's whiskey-soaked performance was damn near impossible to top as far as I was concerned, but I allowed myself to be shanghai'd by Rob Dark Castle, who was on a carefully planned-out mission to catch every band ever. We caught an earful of Mouth of the Architect (I always forget how awesomely heavy this band is... criminally underrated), ran back to catch Enslaved, who brought the fucking noise as always and delivered a fantastic set of new, old, and really old- most of which I missed in favor of French doomsters Monarch! and their pummeling take on female-fronted funeral doom. Angelically ethereal vocals and piercing shrieks, over monolithic riffs and lingering washes of noise? Tres bien!

They seriously blew my mind, and were a killer warmup for Goatsnake's insanely anticipated return to the stage. What can I possibly say about their performance? It ruled. They ruled. The packed-to-the-gills main room was crackling with electricity as they dominated the stage, swaggering through a hit list of their beloved best and delivering one of the best 'reunion' performances I've ever seen. I hope they play more shows after this, for the sake of doomkind (and because I'd kill to see THAT again!).

After the last note had sounded and the masters had walked offstage, Roadburn's main man (and the true heart & soul of the festival), Walter, came onstage to make a short speech about a few schedule changes the fest had been forced to make. For those that haven't heard, a volcano erupted in Iceland yesterday, and the resulting volcanic ash has spread all over the UK and Scandinavia, halting flights and closing down airports in both areas. Several bands have been forced to cancel (Jesu, Evoken) while others are still stuck (Shrinebuilder, the Gates of Slumber, Candlemass, several more) or in transit (Sarke, Trinacria). To make up for the cancellations, Church of Misery and Earthless have both offered to pitch in and play an extra set each, while Walter and his crew will be working round-the-clock to get the other bands here safe. Stay tuned!

and you stay tuned for Part 2 of Kim's Roadburn adventure. Coming soon.