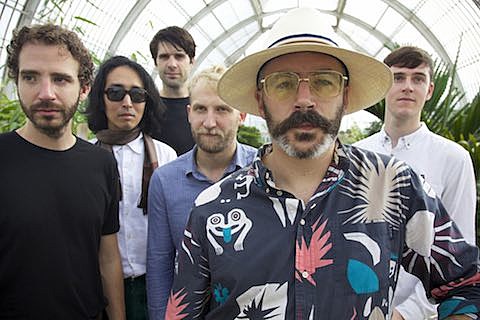 You might recognize Rob Smoughton as a live member of Hot Chip, having played drums, guitar and keyboards over the last six or seven years. He's also played in Scritti Politti and put out his own late-'70s soft rock inspired music under the name Grovesnor. (His 2010 album Soft Return is a lot of fun.) Smoughton takes those '70s sounds one step further with his new band Black Peaches who are going for a sound somewhere in the funky south with echoes of Little Feat, Dr. John and the like. Their debut album will be out in January via 1965 Records (the label run by onetime Rough Trade head James Endeacot) and you can check out bongo-fueled first single "Fire & A Water Sign" below. That single will be out as a 12" with a remix by Hot Chip's Joe Goddard.

Black Peaches have a couple UK dates coming up and those are listed, along with the single stream, below...