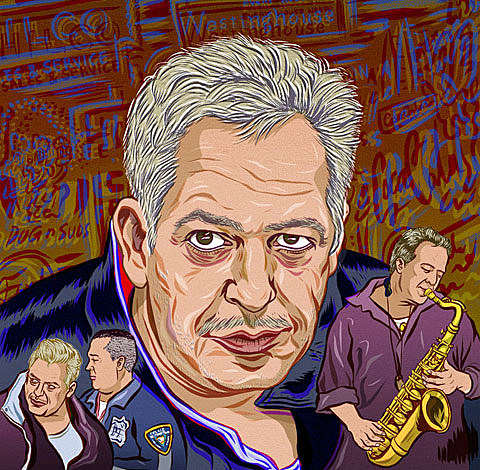 The NY Times ran a great profile of musician Robert Aaron who was busted with lots of heroin in his apartment after cops barged down the door looking for someone to pin Philip Seymour Hoffman's death on...

If drugs were a part of his evolution, they were not the center. For concert tours and a three-year residence in Paris, he said, he stopped using heroin without much difficulty. James Chance brought Mr. Aaron into his punk-funk band James White and the Blacks in 1981 and has worked with him ever since, taking him on tours of Europe and Japan. In all that time, he said, Mr. Aaron's drug use never interfered with his playing.

"Not at all," Mr. Chance said. "He's always been a total professional. Robert's like the most versatile musician I've ever worked with."

Like other friends interviewed for this article, Mr. Chance spoke protectively of Mr. Aaron, whom he called "a real gentleman."

"There's a whole image that people get from the media about people who use narcotics, that they're completely crazy and unreliable," Mr. Chance said. "That's not necessarily true. There's a lot of people who are totally functional, and you would never know that they used anything. And Robert is one of them.

Now out of jail on bail, Robert expects to still be crucified, but meanwhile has been playing some gigs including one with Chance. Read the whole thing at the NY Times.