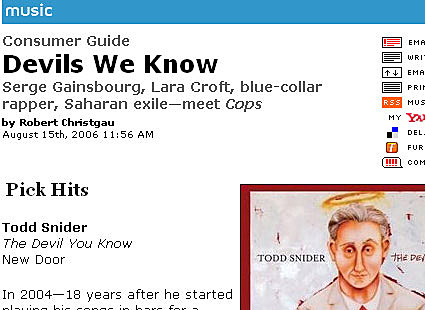 If this comes completely out of the blue, I apologize.

It is now official--Village Voice Media fired me today, "for
taste," which means (among other things) slightly sweeter
severance. This despite the support of new music editor RobHarvilla, who I like as a person and a writer. We both believed I
had won myself some kind of niche as gray eminence. So I was
surprised Tuesday when I was among the eight Voice employees
(five editorial, three art) who were instructed to bring their
union reps to a meeting with upper management today. But I
certainly wasn't shocked--my approach to music coverage has never
been much like that of the New Times papers,

Bless the union, my severance is substantial enough to give me
time to figure out what I'm doing next. In fact, having finished
all my freelance reviews yesterday, I don't have a single
assignment pending. So, since I have no intention of giving up
rock criticism, all reasonable offers entertained; my phone
number is in the book, as they used to say when there were books.
What I don't need is a vacation--the three of us just had a great
two and a half weeks, and Nina matriculated at BMCC yesterday.

No need to respond. Forward to whoever you will.

The letter is via Gawker who also lists everyone fired: "On the editorial side: Darren Reidy, Ed Park, Jorge Morales, Elizabeth Zimmer, and - gasp -- Bob Christgau. On the art side: Minh Uong, LD Beghtol, Tina Zimmer."