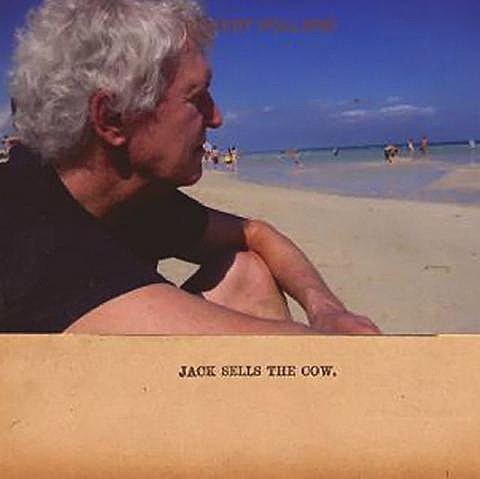 Geriatric multi-media hit-making machine Robert Pollard is set to release his 18th or 19th or whatever solo studio album Jack Sells the Cow on Tuesday September 18, 2012 (Vinyl in stores Oct 2). I'm basically the last person you want to be taking musical advice from because I am a wicked spazz and am hardly the worlds most well-balanced music fan, but I have to say that this 12 song, 32+ minute album is straight-up classic Pollard. This sucker is jammed with more hooks than Bill Dance's tackle box. As a matter of fact, it is probably my favorite Pollard solo effort in quite some time. It's got EVERYTHING you want in a Pollard effort; super catchy up-tempo jams with perfectly constructed chord progressions, lower-key ballady anthems, and melodies and hooks that will stick in your brain for weeks. Holding the whole thing together is absolutely superb studio work. Sometimes his stuff can sound too obviously and intentionally low-fi while other times it can come across as too flippin' clean. This sucker walks somewhere in between and pays off. But what do I know?

From now until the release date, visit RobertPollard.net daily as the site will be streaming a new song each day. (You can stream one below too.) Wait'll you hear the track Fighting the Smoke (sample here). Holy mother f'er that song kicks so much ass.

In paragraph one of this fantastic, probably award-winning article, I called Pollard a "multi-media hit-making machine." Here's where the "multi-media" thing comes into play. In addition to being a master of the medium of "hit making," Bob is also a phenomenal artist with an expert concentration in making collages. You can get a feel for this skills on several GBV and Pollard related releases, but for a more absorbing look you should get your ass familiar with his project EAT Magazine. Rockathon Records has just made available EAT volumes 8 and 9. Eat 8 is 64 pages with over 150 images by Robert Pollard. Originally published in 2011, it's available on Rockathon for the first time. Fake band 45s, fake magazine covers, fake LPs and a whole host of new collages await you. Eat 9 is Robert Pollard's brand new magazine with over 60 pages of collages, many of which will be on display at the upcoming Pollard/Sprout Brooklyn art show The Big Hat and Toy Show.

"Wait, did Klaus just say "on display at the upcoming Pollard/Sprout Brooklyn art show The Big Hat and Toy Show!?" - you. Yes I did! The Big Hat & Toy Show: The Artwork of Robert Pollard & Tobin Sprout will take place on Friday October 5, 2012 6-11pm and Saturday October 6, 2012 2-11pm at The Library is On Fire Headquarters in NYC's toughest neighborhood, Bushwick. Details below.

Perhaps you DON'T want to listen to the new Pollard record. OR look at his artwork. MAYBE you want to see the man in the flesh, kickin up them legs and a-twirlin' the mic and a-drinkin' the booze? Well, if you are south and west of NYC, you might just get your chance. Guided By Voices has announced a l'il tour taking place this fall that features 13 dates that launches in Ohio and concludes in Missouri and avoids the Big Apple entirely. Full dates are listed below....