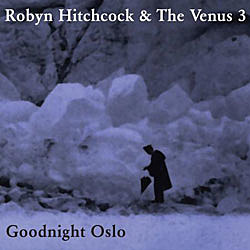 "On February 17th Robyn Hitchcock & the Venus 3 - comprised of R.E.M's Peter Buck on guitar, Scott McCaughey (The Minus 5, Young Fresh Fellows, R.E.M.) on bass and drummer Bill Rieflin (Ministry, R.E.M.) - will storm back onto the pop music landscape with Goodnight Oslo, the follow-up to their critically lauded 2006 album Olé Tarantula.

Olé Tarantula marked the beginning of a stark renaissance in the career of one of Britain's most enduring songwriters and performers, reinvigorating his unique artistic voice and illuminating his influence on another generation of psychedelic folk disciples. Continuing Olé's trend, Goodnight Oslo explodes the Hitchcock myth with an album of pure pop mastery complete with horns, jangling guitar hooks and signature Hitchcock-ian word paintings that prove the Englishman's creative engine is more fiery than ever. Goodnight Oslo harkens back to Hitchcock masterpieces Underwater Moonlight and Globe of Frogs, with early opinions calling it one the best albums of his already storied career.

The album features guest vocals from Colin Meloy (The Decemberists) and Sean Nelson (The Long Winters, Harvey Danger). One man horn section Terry Edwards contributes signature stabs and sweeps, adding color what Robyn refers to as, "The best record of my adult life," and his unique vision of pop music in a perfect world.

Much about finding a return route out of the rabbit hole, Goodnight Oslo is bright and shining, further delineating this era from the frequently dark nature of his earlier work. Says Robyn, "These songs are largely about breaking out of a negative cycle, and believing that change can happen. It's not a recovery album or a therapy album per se; it's just a sign to the exit."

Oslo comes on the heels of 2 meticulously curated retrospective boxed sets. I Wanna Go Backwards and Luminous Groove combine to reissue six albums (plus 4 discs of rarities) worth of Hitchcock's 1980's Egyptians and solo output." [PR]

Colin Meloy appears on Robyn's new album, and Robyn does the same for Colin's.