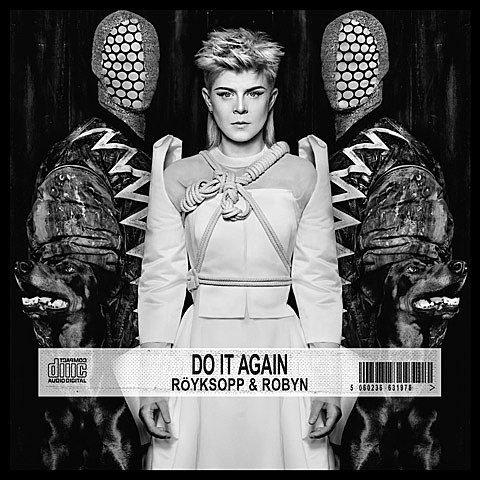 Royksopp & Robyn's collaborative mini-LP, Do it Again, came out last week (5/26), five songs of sumptuous Scandinavian dancepop. If you haven't checked it out you can stream the whole thing (via Spotify), along with a video of the two artists discussing each track and the new video for "Sayit", below.

As mentioned, Royksopp & Robyn will be taking the show on the road this summer, including NYC, Chicago, Toronto and other cities around North America. One of the more picturesque stops on the tour will be at Denver, CO's Red Rocks Amphitheater on August 27. If you're going to be in Denver for that stop on the tour, you can get tickets via the BrooklynVegan presale starting today (6/4) at noon Mountain Time (that's 2 PM NYC time). Password is Bvegan

What next for R & R? The mini album may be a preview of something bigger. Exclaim talked to the Scandinavians:

...Do It Again was touted as an introduction to a forthcoming Röyksopp full-length, [but] they're tight-lipped about their next steps.

"We never spoke of what we were going to do," says Brundtland, "kind of with the feeling that if you just do it instead, it's more efficient and it happens the right way. We basically don't want to tell you too much about it, if that's okay."

Berge, meanwhile, hints that it will stay "within the same sort of realm [as Do It Again] when it comes to themes. It's about spirituality, satisfaction and fulfillment, and it's about decay and demise, doubt and denial, attractions and compulsions; themes we've dabbled in in the history of Röyksopp. It will be down that route with a darker sentiment; the same kind of darkness you find on this release."

Asked whether she'll play a substantial role on that album, Robyn is coy: "Um, I don't know! We'll see... what happens."

Interjects Brundtland, "I think we'll point back to what we said. We don't want to give too much away."

Videos and streams and dates below...

Robyn & Röyksopp - Do It Again

Röyksopp & Robyn "Do It Again" Track-by-Track