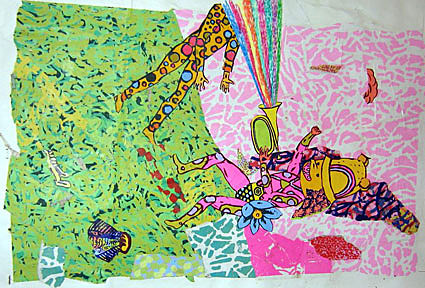 There was one Dirty Projectors & Ecstatic Sunshine tour date I forgot to mention - the one that goes down this Saturday August 4th at Death By Audio in Williamsburg...

As you might know, Ecstatic Sunshine is another one of those hot bands from Baltimore - the same place that brought us (the band who opened for Suicide on Friday) TheDeathSet, and TheDeathSet are also playing ANOTHER BENEFIT SHOW in Brooklyn w/ the impressive top-to-bottom, Baltimore-to-Philly-to-NYC lineup of Peelander-Z, The Teeth, The Boggs & DJ Nick Catchdubs. This one is for Universal Healthcare, and tickets are on sale for it. More info below.... 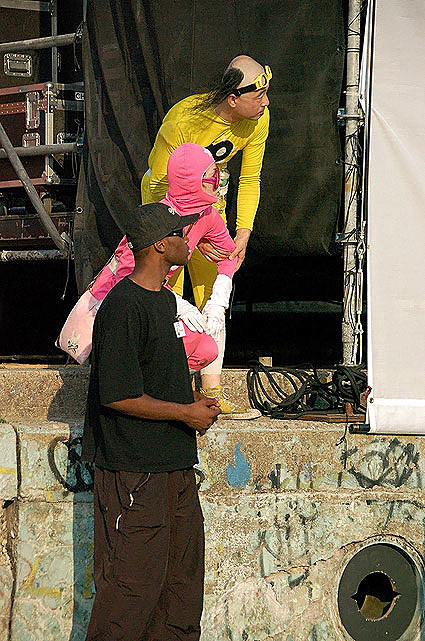 Doors are at 3pm & we expect you to enjoy sponsored: Cocktails by Sonnema VodkaHERB ,
Buckets of cold ones from Pabst Blue Ribbon + Cart food +graffiti by SUE will be consumed in the backyard Space by The Hook located in the heart of Red Hook, Brooklyn
18 Commerce St. 11231,

Here's what some of the bands had to say about healthcare:
"During this tour our drummer Jonas got a toothace and had to get it pulled in San Fran (true story). It costed him 1400 dollars. But what could he do. He was miserable and getting weird on pain killers (he got from strangers at clubs) trying to hold off the procedure. He was always kind of drunk on whiskey too, bumpin' around in stairwells and stuff. It's because he doesn't have health care. None of The Teeth have health care so as far as we know we're perfectly healthy. We can't afford checkups so we'll never know really. I could be rotting on the inside for all I know."
-Aaron MoDavis - The Teeth

What is most important in our life/It's health!!/If we don't have health/We can't eat, walk, dance, sleep and Dream/We have to think about health more/It's not difficult/Let's start with the first step/Just smile with us/What a health!/Super health!"
-Peelander-Z From their song "Super Health"

"Once, I woke up in an ambulance and the guy said it's alright. I woke up again in the hospital and they said don't worry about it. Apparantly, I fell down and hit my head. It wasn't a big deal but they made it one. I had a bump on the noggina nd a little blood on my head. They dumped me out on the street at 5AM with a paper that said I was intoxicated and they gave me a MRI and a tetnus shot. Apparantly I owe them $4500 for their services. But fuck that! I didn't ask for shit!"
-Brian Asbury of The Teeth

America sucks dude. Sorry but when it xomes to that issue, step it up. Health care for the rich, that's pretty much my impression of what's happening. I don't have health care. I smashed my front tooth out when I was riding a bicycle last year. That was kind of band and I just kind of had to suck it up. I basically ran into this gutter and my friends found me in a Jesus Christ pose lying face down on the concrete with blood spilling out of my head. I didn't have any cuts on me except for my face so I ran right on to my face. It was about a week before I left on tour."
-Johnny Sierra of The DeathSet

Michael Moore is not confirmed to be there, but someone should tell him to come.