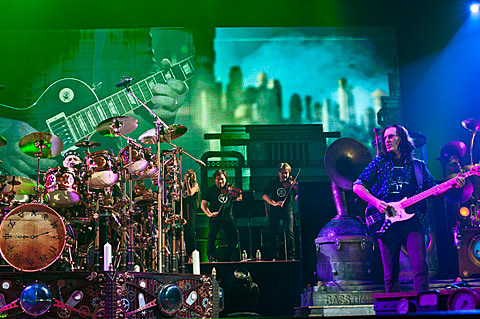 In a just-held ceremony at the Nokia Theatre in L.A. that was hosted by Red Hot Chili Peppers bassist Flea, the 2013 Rock and Roll Hall of Fame inductees were announced after nominees surfaced a short two months ago. Among this year's class are Randy Newman, Public Enemy, Donna Summer, Heart, Albert King and the long-snubbed Rush, along with receipients of the Ahmet Ertegun Award, Lou Adler and Quincy Jones.

Reportedly, Rush was the clear beneficiary of the recently instituted popular vote, and the band had the following comment:

"We are honored to be inducted into the Rock and Roll Hall of Fame. The 3 of us are especially appreciative of our loyal fans whose support and dedication has gone a long way to making this possible. P.S. And special thanks to our moms for voting 6000 times!" - Alex, Geddy, & Neil

The induction takes place in April 2013, followed by a telecast of the ceremony on HBO. Congrats guys!