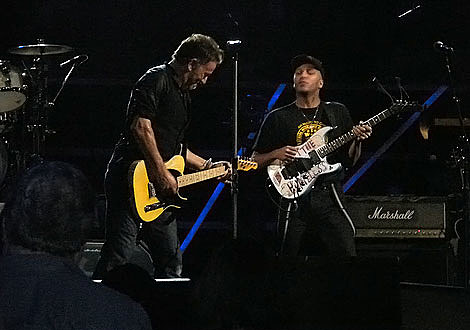 U2 closed the second night of the MSG Rock & Roll Hall of Fame shows on October 30th. At the first (10/29), it was Bruce Springsteen & Billy Joel (before one big group sing on Jackie Wilson's "Higher and Higher")...

After "Badlands" much of the drained audience began leaving and then rushed back to their seats when Billy Joel sat down at the piano and launched into "You May Be Right," "Only The Good Die Young" and "New York State Of Mind." (The pair were uniting the kindred spirits of New Jersey and Long Island, Springsteen explained.) "Higher and Higher" wrapped up the night. The official set list had the show ending at 11:36:55 (yes, they thought they had it down to the exact second), but the final notes rang out at 1:31 a.m. Six straight hours of music, and that was just the first of two nights. [Rolling Stone]

Bruce was actually there both nights (one of many possibly "filling in" for Eric Clapton, who canceled last minute on the second). Those in attendence on the 30th got to see U2, Bruce Springsteen and Patti Smith sing together on "Because the Night." (And U2 + Mick Jagger (another unannounced guest) + Fergie + Will.i.am sing "Gimme Shelter"...). Ray Davies, Lou Reed, and Ozzy Osbourne all performed with Metallica. Many played with Stevie Wonder. Full setlists below.

HBO will be airing four hours of highlights on Thanksgiving weekend.
(November 29th at 8PM ET).

Bruce's current tour wraps up November 22nd in Buffalo. He was at Giants Stadium earlier this fall, playing the last concerts ever there. U2 also played the venue for two nights in September, and will be back in Jersey in 2010 as part of their just-announced tour.

Set lists for the Rock and Roll Hall of Fame shows are below...

Bonnie Raitt with David Crosby and Graham Nash:
"Love Has No Pride"

Jackson Browne with Crosby, Stills and Nash:
"The Pretender"

Crosby, Stills and Nash with James Taylor:
"Love the One You're With"

Paul Simon:
"Diamonds on the Soles of Her Shoes"
"Me and Julio Down by the Schoolyard"
"You Can Call Me Al"

Paul Simon:
"Late in the Evening"

Little Anthony and the Imperials:
"Two People in the World"

Simon and Garfunkel: "The Sounds of Silence"
"Mrs. Robinson"/"Not Fade Away"
"The Boxer"
"Bridge Over Troubled Water"
"Cecilia"

Stevie Wonder: "Blowin' in the Wind"
"Uptight (Everything's Alright)"
"I Was Made To Love You"
"For Once in My Life"
"Signed, Sealed, Delivered I'm Yours"
"Boogie On Reggae Woman"

Smokey Robinson with Stevie Wonder:
"The Tracks of My Tears"

John Legend with Stevie Wonder:
"Mercy Mercy Me (the Ecology)"

Stevie Wonder with John Legend:
"The Way You Make Me Feel"

B.B. King with Stevie Wonder:
"The Thrill Is Gone"

Stevie Wonder:
"Living for the City"

Bruce Springsteen and the E Street Band with Tom Morello:
"The Ghost of Tom Joad"

Billy Joel and Bruce Springsteen and the E Street Band:
"You May Be Right"
"Only the Good Die Young"
"New York State of Mind"
"Born To Run"

Aretha Franklin:
"Baby, I Love You"
"Don't Play That Song"
"Make Them Hear You"

Jeff Beck:
"Drown in My Own Tears"

Metallica:
"For Whom the Bell Tolls"
"One"
"Turn the Page"

Metallica and Ray Davies:
"You Really Got Me"
"All Day and All of the Night"

U2, Bruce Springsteen and Patti Smith with Roy Bittan:
"Because the Night"

U2 and Bruce Springsteen with Roy Bittan:
"I Still Haven't Found What I'm Looking For"

U2 and Black Eyed Peas:
"Mysterious Ways"/"Where Is the Love"/"One"

U2 and Mick Jagger:
"Stuck in a Moment You Can't Get Out Of"