Lauryn Hill reacts to reviews from her Saturday appearance
at Rock The Bells in Mountain View (more by Andrew St. Clair) 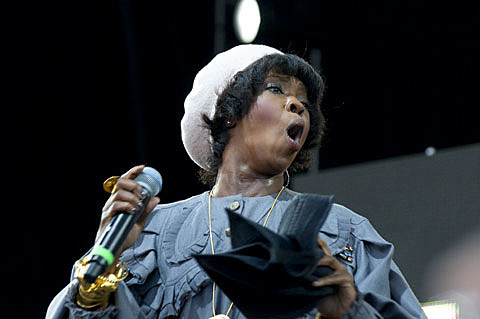 Any music event that pins its hopes on Lauryn Hill -- one of the most maddeningly disappointing performers of recent years -- is fighting an uphill battle right from the very start.

Fortunately, the 2011 Rock the Bells festival tour, which stopped Saturday (8/27) at Shoreline Amphitheatre in Mountain View, has so many other things going for it -- so many, in fact, that it's a shame to have to even bring up the headliner. But organizers made their bed, by picking Ms. Hill for the prime time slot, and now they have to sleep in it.

What's ironic, however, is that this was arguably the best performance locals have seen from Hill in many a moon. And it still sent thousands scurrying for the exits, with some complaining loudly about the 36-year-old soul singer's poor outing, midway through the set.

That's how low Hill has set the bar -- basically at ground level -- and anything greater than a complete train wreck will clear it. That fans weren't demanding refunds, like they had when Hill performed a 2007 show at Oakland's Paramount Theatre, can be seen as a kind of victory for this troubled performer.

Still, it was disappointing, especially for those die-hard fans hoping against all reason that Hill can someday return to the heights she reached in the '90s. And it was the only disappointment during an otherwise splendid day of hip-hop, which ran some 12 hours.
-[Mercury News]

I'm guessing he didn't like Lauryn Hill. Judge for yourself when she headlines the upcoming Rock The Bells date in NYC this weekend (9/3). The shows goes down on Governors Island (may the weather gods be nicer to hip hop than they were to Dave Matthews) Tickets are still available and set times have been announced, though NOTE:

"DOOM will no longer perform on the remaining scheduled festival dates. He extends his apologizes to fans for not being able to make the US shows but looks forward to performing on Rock The Bells soon."

Curren$y also had to cancel the 8/27 show in California due to a broken ankle sustained at the 8/20 California date.

In related news, Erykah Badu (who is on board for Rock The Bells) will be in NYC early to spin at Le Poisson Rouge on September 1st with Adrian Younge. The event is FREE with RSVP (send to waxpoetics@lprnyc.com..Please include date of show in subject line). The event is one of two FREE Wax Poetics/Skullcandy events at the venue, with the second taking place on 9/29 with DJ Premier and Kendra Morris. RSVP with the same email to that show as well.

Check out some videos/interviews from California below...

Big K.R.I.T. on Rock The Bells Being A Dream Come True