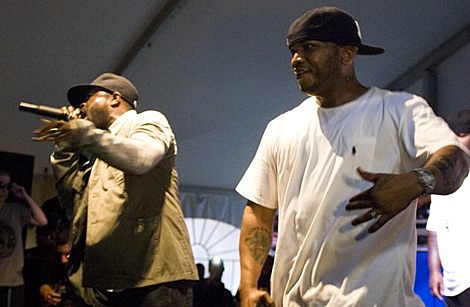 Though daily tickets are now sold out, you can still buy tickets for both nights of The Rock The Block Fest going down at Southpaw on August 6th & 7th. The curiously Thursday-Friday festival scheduled the mighty Styles P (my favorite performer at Brooklyn Hip Hop Fest) for Aug 6th, with State Property mainstay and recent Cash Money signee Freeway filling the slot for Aug 7th. Metermaids and NSR as well as Hezekiah and Kimberly Nicole get the assist for days one and two respectively.

The Metermaids released their Nightlife in Illinoise mixtape in the tail end of last year (download that above), featuring material sampled from Sufjan Stevens's Illinoise LP mixed with their Nightlife LP. The crew recently released the Live At Arlene's Grocery EP in the pay-what-you-want format and are scheduled to play Arlene's Grocery again on July 23rd with Prayers For Atheists.

Illadelphian and Roots cohort Hezekiah released his Cure For The Common $oul Mixtape (downloadable above). Featuring appearances by Freeway, Reef The Lost Cauze (Army Of The Pharoahs), and many others, Hezekiah rhymes and remixes tracks by Jay-Z, Kanye West, Will I Am, Zap Mama, and many others.

The Roots are scheduled to take on Highline Ballroom for the umpteenth time on July 8th (tonight), tickets are still available.