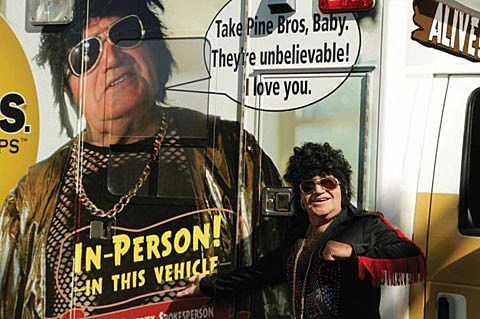 "In the late '50s, Rudy "Tutti" Grayzell went to Los Angeles and then on to Las Vegas and Seattle. He settled in Portland for a long time before coming back to San Antonio for a few months. He's now based in Pacific Grove, Calif. In August, Grayzell worked Lincoln Center in New York City, where he sang Judy during a salute to Sun Records.

Walker also introduced a 17-year-old Grayzell to Elvis Presley. Grayzell and his band were playing a supermarket opening in San Antonio. Presley stopped by the gig. Presley was impressed with Grayzell and asked the youngster from South San to go on the road as his opening act.

"Elvis gave me my nickname, Rudy 'Tutti,' after I added Little Richard's Tutti Frutti to my set," Grayzell said. "Elvis was a beautiful human being. I knew from the first time I saw him in that grocery store parking lot that he was going to be a big star." [MySanAntonio]

As the article goes on to say, and the picture somewhat illustrates, Rudy "Tutti" Grayzell is currently also working as the spokesperson for Pine Brothers cough drops (he's all over their website too).