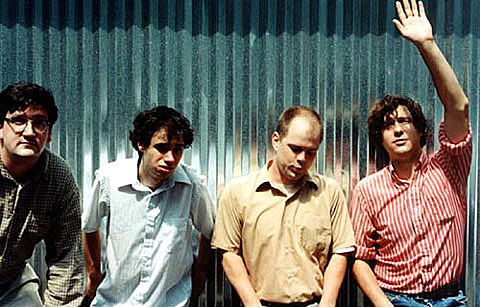 You know that scene in The Blues Brothers where John Belushi is in the church and God's light shines down on him? An epiphany like that. I watched the Rock*A*Teens play as I had numerous times before, but watching them onstage that night was an "I have seen the light!" moment. A moment that I will always remember. A moment where I got it. I got it--the Rock*A*Teens' swagger, their heartfelt lyrics, their powerful rhythm section, the random noisy flourishes, and the hooks that fell out of their instruments with alarming regularity. As Harvey Milk ended their career that night (at least for the time being), the Rock*A*Teens became one of my favorite bands from Georgia. Fuck that--one of my favorite bands from anywhere. - Chunklet founder Henry H. Owings

'90s era indie rock band The Rock*A*Teens formed in 1994 in Georgia. While they took from rockabilly (love of reverb, crazed playing), they added elements of music hall and powerpop, creating a boozy sound all their own. After five albums and a handful of singles and EPs, the band called it quits in 2002. Their final album, 2000's Sweet Bird of Youth, never got a vinyl release but that is being rectified as part of Merge Records' 25th Anniversary. It'll be out June 3 on double vinyl and comes with a download of the band's final concert. You can pre-order it now.

The Rock*A*Teens have been coaxed out of retirement for the Merge 25 fest and will make the most of it with an East Coast tour. The culminates with two NYC shows: Glasslands on August 9 with Bird of Youth, and a Wordless Music-presented show at Le Poisson Rouge on August 10 with Okkervill River's Will Sheff. Tickets to Glasslands and LPR are on sale now.

All tour dates are listed, along with a tour announcement video and a few streams, below.

rock a teens car and driver

The Rock*A*Teens - I Could've Just Died

The Rock*A*Teens - Return As a Bird