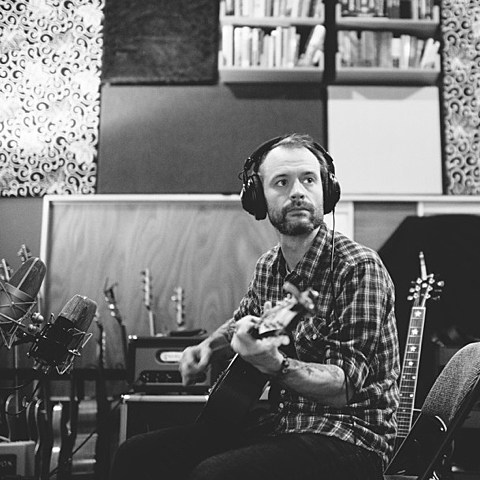 Long-running singer/songwrriter and former Waxwing frontman Rocky Votolato is returning this year with his eighth solo album, Hospital Handshakes, which is due out on April 21 via his new label home No Sleep. It follows releases on Barsuk and other labels, making him at least the second artist after Harvey Danger to team up with both Barsuk and No Sleep. The record was produced by former Death Cab for Cutie member Chris Walla, who also produced Harvey Danger frontman Sean Nelson's recent solo album and many other records.

While Rocky's often heard without too much more than an acoustic guitar, the album's lead single "The Hereafter" is the kind of catchy, driving indie rock that wouldn't be out of place on another Walla-produced album, Nada Surf's The Weight Is a Gift. And while it still retains Rocky's intimacy, there's also an undeniable Springsteen influence on those anthemic melodies. Listen below, via Stereogum.

Rocky's gonna get even more intimate when he goes on his living room tour which begins in Orcas Island, WA this week (3/12) and wraps up in Seattle in late April. Like they usually are on these living room tours, the venues are unannounced, but advance tickets for most dates are on sale.

The tour's NYC stop is technically in a living room, but it's a living room that frequently doubles as Bushwick DIY venue Suburbia. It happens April 2 with a great lineup featuring another '00s Barsuk songwriter, Kind of Like Spitting's Ben Barnett (now on Topshelf), and former Vivian Girl Cassie Ramone. This show actually has no advance tickets; it's $10 at the door.

That's one day after Kind of Like Spitting's full-band tour with The City on FIlm (Braid co-frontman Bob Nanna's other band) hits NYC at The Studio at Webster Hall (4/1). Opening that one is the No Sleep-signed Lee Corey Oswald, and the band Living Room... who live at Bushwick venue Suburbia. Tickets are still available.

All Rocky Votolato dates are listed, with the new song, below...