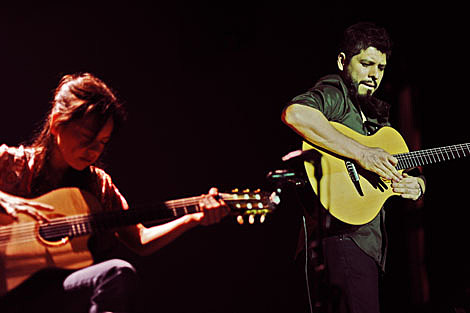 For Sanchez and Gabriela Quintero the story begins with all the key ingredients for that quintessential rags-to-riches story - humble beginnings and of course, undeniable odds stacked against them - but that's not what makes this story so damned interesting. Growing up in Mexico City, that country's pinnacle metropolis of culture and arts, Rodrigo and Gabriela were exposed to music from an early age. As teenagers the two developed a keen love of music and eventually met when Gabriela joined Rodrigo's thrash metal band, Tierra Acida (Acid Earth). With ambitions of becoming serious musicians, they applied to a music conservatory, but having had almost no proper musical training both were denied entry. And so they continued their affair with Mexico City's rock scene. Yet opportunities were scarce, and success even scarcer. Years of unrequited pursuit left them frustrated and disheartened with their home city's music industry. So with about $1000 and no English skills whatsoever, the duo picked up and moved to Dublin, Ireland. Though it may have been by choice, the odds were certainly stacked against them, but Rodrigo y Gabriela weren't in music to play the odds.

It was all about the adventure. "We didn't actually want to be part of a record label anymore, especially when we first went to Europe. We were in a backpacking situation but we were happy," says Rodrigo of their early excursion to Europe, with a much improved English vocabulary now. "We were young and totally irresponsible; we weren't really worried about anything." [Jambase]

As the above article points out, Rodrigo y Gabriela, though originally from Mexico, now reside in Ireland, home of Glen Hansard of The Frames and Swell Season. The Swell Season's 2nd headlining show at Radio City is coming up soon - January 19th to be exact (tickets). Josh Ritter opens. The Swell Season show is one day before Lady Gaga kicks off her four-night run at the historical venue, and it was recently leaked that Spoon will be playing there in March.

On New Years Eve, Rod and Gab participated in UK TV host Jools Holland's annual Hootenanny on BBC Two. Check out the videos and all dates below...