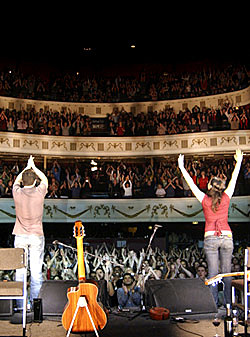 Mexican guitar duo Rodrigo y Gabriela are touring throughout 2007 including a stop at Stubbs during SXSW, and a much smaller show at Bowery Ballroom in NYC on March 21st. I don't know how quickly they're catching on here, but I won't be surprised if the Bowery show sells out pretty quickly.

Last time they were here they played a sold out show at SOB's. Next time Summerstage?

On January 26th they'll be on Leno.

All tour dates, and a video of them playing Letterman, below...

"The self titled album was released in the United States on Oct 3rd. A Mexican release followed later that month on Oct 31st. The release features an Audio CD and Limited edition DVD."

In other world music news, tickets are still on sale for Knonono No 1 at Bowery Ballroom on May 5th. All tour dates here.

Rod y Gab are playing Stubbs on March 15th. Badly Drawn Boy is playing there on the 16th.