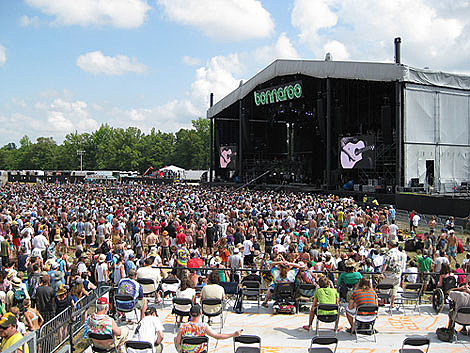 + I got to meet Raphael Saadiq, who signed my guidebook and kept a pleasant demeanor despite playing two shows on a hot Tennessee Saturday afternoon. If you don't know who he is, you should check him out. You'll like him. Promise.

+ Trent Reznor announced that their performance at Bonnaroo will be the last show they'll ever play in the United States. I missed most of the show but made it over there for that announcement and the following "The Hand That Feeds." I'll believe it when I see it.

+ I got to see David Byrne. This warrants two mentions. Yeah, that was the best show I've seen in a while.

Dave Hill got to see David Byrne (all dressed in white) too, and like he did at the Dark Was the Night concert, David Byrne also joined the Dirty Projectors on stage at Bonnaroo over the weekend... the stage Mr. Byrne curated that also included Katzenjammer who played Mercury Lounge in NYC last night (6/16).

NYC recently got to see David Byrne in white too, and NYC will next get to see Rodrigo y Gabriela at Terminal 5 on September 16th. That's the first of a string of just-announced, new U.S. dates which go along with the announcement of the duo's new album.

ATO Records is excited to announce that Rodrigo y Gabriela will release their new studio album, entitled 11:11, on Tuesday September 8th. 11:11 was recorded in Ixtapa, Mexico and produced by Rodrigo y Gabriela, with John Leckie co-producing two of the tracks. The album was mixed in Wales and London by Colin Richardson, best known for his work with Slipknot and Trivium.

Comprising 11 new original compositions, 11:11 is the band's personal "Gracias" to 11 musicians, both past and present, who have inspired them along the way. Alex Skolnick of metal gods Testament guests on the album, as do widely respected acoustic veterans Strunz & Farah.

The next NYC-area YYY's show is at All Points West where Rod y Gab played last year. Full 11:11 tracklist, Bonnaroo videos, and all tour dates below...