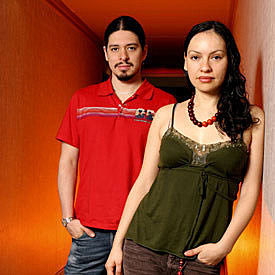 Their press releases read: "Rodrigo (Sanchez) and Gabriela (Quintero) are two fast-fingered, Dublin-based, Mexicans with a unique sound created on acoustic guitars......Rod and Gab are two lifelong heavy metal fanatic Mexicans living in Dublin, Ireland, playing hispano and latin influenced acoustic guitars that come on with the rush of a full rock band, drum kit and all, -- beat both the Arctic Monkeys AND Johnny Cash to number one in the Irish charts."

They played Joe's Pub on August 7th. (I threw a small mention of it in a Sirius playlist). They're back in NYC for a show at SOB's on September 26th. I haven't seen them yet, but people say live is where they really shine. All tour dates below...