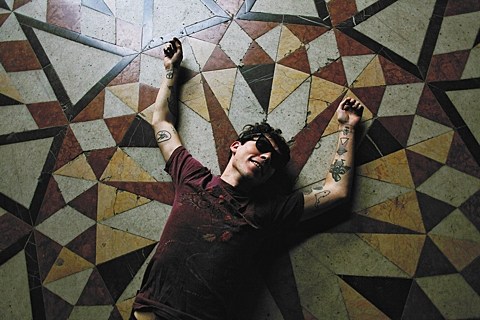 Last fall, we mentioned that Roger Harvey was prepping his debut album and we posted a few alternate versions of songs from it. Now he's finally ready to get this thing out into the world. Roger signed with Black Numbers for the album, titled Twelve Houses, and the label will release it in early October (pre-order).

The album's first official single is "City Deer," which premieres in this post. While some tracks, like his debut single "Lovers Can Be Monsters," bear a strong Neutral Milk Hotel influence, "City Deer" is one of the more rocking songs. It's not too far removed from the minor pop masterpieces Barsuk was putting out in the late '90s / early '00s (think early John Vanderslice and Death Cab), and it would also fit nicely with newer bands like The Antlers or Youth Lagoon. Like all of those bands, it's delicate, quietly ambitious, and wears its heart on its sleeve ("I'm obsessing over death again / like I did when I was seventeen"). Check it out below.

Roger Harvey has a few dates coming up, including an Atlanta show with Beach Slang, The Sidekicks and Cayetana (the latter two of which he played a BV show with in January), and then The Fest (again).