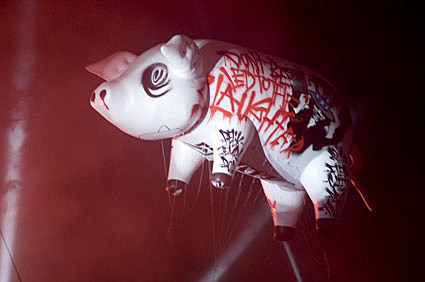 Anonymous wasn't kidding! As you can see in the video at the end of this post, Roger Waters' pig got loose at Coachella on Sunday - it just zig zagged away, never to be seen again. Although it sounds like a practical joke, I'm pretty sure this press release I just got is real....

COACHELLA ORGANIZERS OFFER $10, 000 REWARD AND FOUR FESTIVAL TICKETS FOR LIFE IN EXCHANGE FOR THE SAFE RETURN OF THE INFLATABLE PIG THAT ESCAPED DURING SUNDAY HEADLINER ROGER WATERS' SET

COACHELLA organizers are offering $10,000 and four (4) festival tickets for life in exchange for the safe return of the two-story inflatable pig that broke loose during Roger Waters' set on the final night (Sunday, April 27) of the 2008 COACHELLA VALLEY MUSIC & ARTS FESTIVAL. The pig escaped and floated into the desert sky just prior to the intermission between Roger Waters' back-to-back sets--marking the only back-to-back COACHELLA sets by one artist in the critically acclaimed festival's history.

Anyone with information on the lost pig, should email lostpig@coachella.com.

Watch it happen in the Coachella video below...

watch the pig fly away @ Coachella

...and keep an eye out for pigs on the wing.

Photos and more info on the Roger Waters performance is HERE.