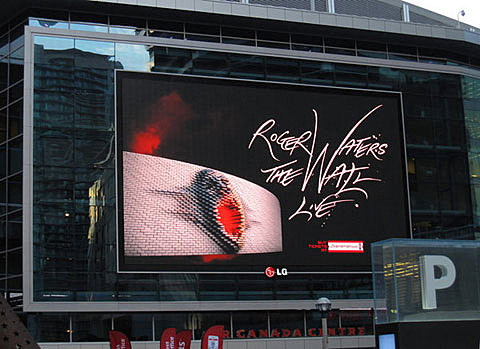 "Roger Waters treated Toronto fans to his first performance of The Wall in more than 20 years on Wednesday, mixing bits of vintage stagecraft with all-new flourishes in front of a sold-out Air Canada Centre crowd.

The former Pink Floyd co-frontman was performing the landmark concept record for the first time since 1990, with the only other performances of the 1979 record coming in four cities (London, Uniondale, N.Y., Los Angeles and Dortmund, Germany) during a tour in 1980-81." [Canadian Press]

Tickets are now on AmEx presale for a November 6th Roger Waters "The Wall Live" show happening at Madison Square Garden in NYC. The new show is two days after the previously announced NJ shows, and a month after the other two shows Roger is playing at MSG.

Check out some videos from the Canadian shows below...