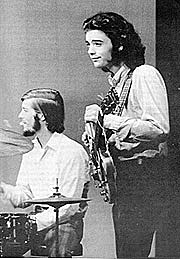 "Roky Erickson (born Roger Kynard Erickson on July 15, 1947) is an American singer, songwriter, harmonica player and guitarist from Texas. He was a founding member of the 13th Floor Elevators.

One of rock and roll's most famous cult figures and burnouts, Erickson is perhaps as well-known for his erratic personal behavior as for his musical talents......

....In September 2005, Erickson performed his first full-length concert in 20 years at the annual Austin City Limits Music Festival with The Explosives....

...According to the article, Roky played at 11 gigs in Austin in 2005, has obtained a drivers license, owns a car, and voted last year. He has plans to do more concerts with The Explosives in 2006.." [Wikipedia]