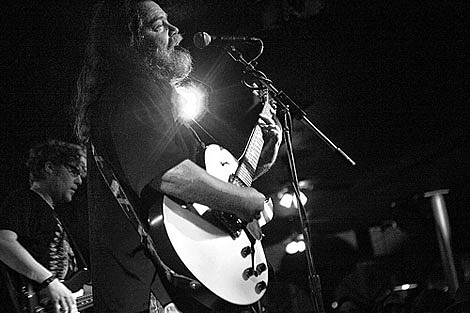 "The Scion Garage Fest was pretty amazing, and I managed to catch the complete sets from ten bands. Simply Saucer was a huge disappointment, as their set was comprised of mostly watered down blues that sounded nothing like their sole album- Cyborgs Revisited. There were a couple of bands that I missed because the schedules didn't allow me to see everything I wanted to see. I opted to go to Black Lips instead of Gris Gris because I couldn't sit through any more of Simply Saucer's set, and I needed some sustenance from Dante's inferno. After spending half of Black Lips set outside due to Berbati's annoying 1 in= 1 out policy, I decided to stay there and check out Roky Erickson's set. Unfortunately, catching the King Khan & BBQ set at Dante's was not in the cards for me...

...I'm not a huge fan of Roky's solo stuff as it always reminds me of the music from bad 80's movies, but closing with with the 13th Floor Elevator's classic "You're Gonna Miss Me" was an ace move." [Eclectic Grooves]

Can't make it to Maxwell's on New Years Eve to see Roky Erikson? Now there are two more NYC-area chances to see him first thing in the new year. On January 1st he's playing a show at Southpaw, and then on January 2nd he returns to Maxwell's. The two new shows are $10 cheaper than the New Years Eve one, and tickets for all three are on sale.