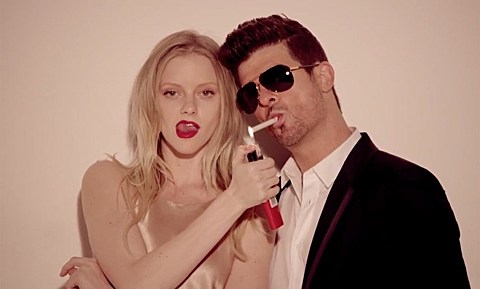 We've been seeing a lot of lists of what people thought the best music of 2013 was, including Rolling Stone, and now the magazine's Rob Sheffield has weighed in on his "Worst Song of This or Any Other Year": "Blurred Lines." Throughout the song's life, it's been sued by Marvin Gaye's family for plagiarizing Marvin Gaye, and it's been called "rapey" for its "I know you want it" lyric and other themes in the song and its video. Some may call it one of the most annoying songs ever, and others may call it "The Album That Justin Timberlake Is Too Famous To Make in 2013." In the Rolling Stone article, Sheffield writes:

Congratulations, Robin Thicke! "Blurred Lines" is the worst song of this or any other year. I can't remember the last time there was a hit song this ghastly - the sound of Adam Sandler taking a falsetto hate-whizz on Marvin Gaye's grave. I guess the year's not over yet so it's theoretically possible a worse contender could emerge, but I don't see it happening. Let me put it this way: Christina Aguilera and Mariah Carey could pay their holiday respects to Lou Reed with a duet medley of "The Black Angel's Death Song"/"O Little Town of Bethlehem" and it would still be a distant second.

He continues with multiple paragraphs of well thought-out hatred, and finally concludes:

So will "Blurred Lines" stand the test of time? Will it go on sucking for years like "Wild World"? Is this feeling an eternal flame? Or will it vanish, like "Save The Best For Last"? Well, in the words of a band who sucked wildly in 1982 and were immediately forgotten, only time will tell. But one thing is for sure. Nothing in 2013 sucked like "Blurred Lines." And this was the year we got a Leonardo DiCaprio remake of The Great Gatsby. Everything next year will just have to suck a little harder.