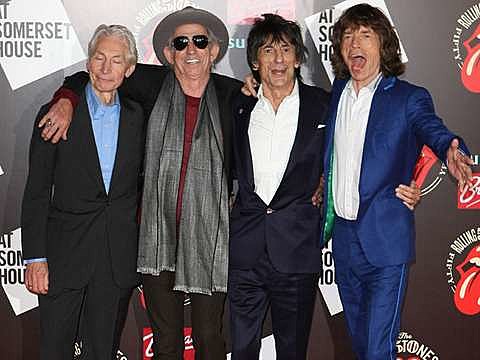 According to Billboard, a source tells them that The Rolling Stones will play four shows in November, two at London's O2 Arena, and two at Brooklyn's Barclays Center. This follows Mick Jagger's July interview with Evening Standard, where he promised the band would perform live this autumn. No other details have been revealed yet, but if this is true, stay tuned for more details.

Meanwhile, Mick Jagger recently tweeted a picture of himself in a recording studio and wrote, "Had fun in the Paris studio this week!" Keith Richards recently spoke to Rolling Stone about recording together too:

The band also gathered in London in July to celebrate their 50th anniversary with a photo exhibit. Before that meeting, Keith Richards told Rolling Stone the band would also use the time to discuss recording. "I'd love to get some tracks down and see what songs we've got. And that goes along with part of getting the band back together and getting things moving. So I'd love to cut some tracks, yeah." Asked if he saw himself writing one-on-one with Jagger again, Richards replied, "I have no doubt."

Keith also spoke about recent rehearsals the band has been having: "We're just getting our chops together. It was like playing in the garage, a maintenance check, you know?"

No word on whether or not these studio sessions will result in a new album, which would be their first since 2005's A Bigger Bang, though The Guardian is reporting that "it is more likely they have laid down new songs for inclusion on a greatest hits set due this autumn."

Some classic Stones videos are below.

Rolling Stones - "Sympathy for the Devil" at 1969 Altamont