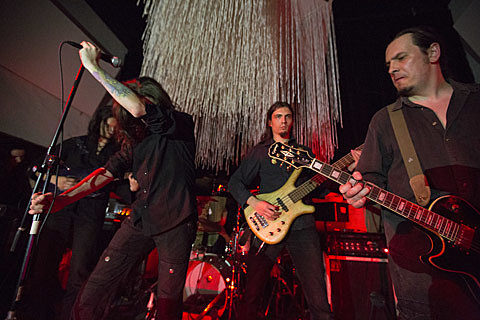 Romania's Negura Bunget will be touring the US and Canada with their fellow countrymen Grimegod this Spring, landing at Saint Vitus on May 9 with So Hideous and Kevorkian. Tickets are on sale.

This will mark just the second time Negura Bunget will bring their folked-out black metal to the US. Last time, thanks to customs difficulties, the band barely made it in time for their New York gig at Cameo. That was actually their firstever US show, and the band quickly shook off any bad customs experience jitters with a solid set that hit all the highlights of Negura Bunget's much acclaimed Om.

In related news, So Hideous' 2013 self-released album Last Poem/First light is getting a rerelease on Prosthetic Records later this month, with pre-order packages available now. The band's huge, operatic post-black metal should pair well with NB.

Other notables from the tour dates below that jump out at first glance are shows in Oakland with Botanist and Minneapolis with False. All dates are listed, along with a tour flyer, below...