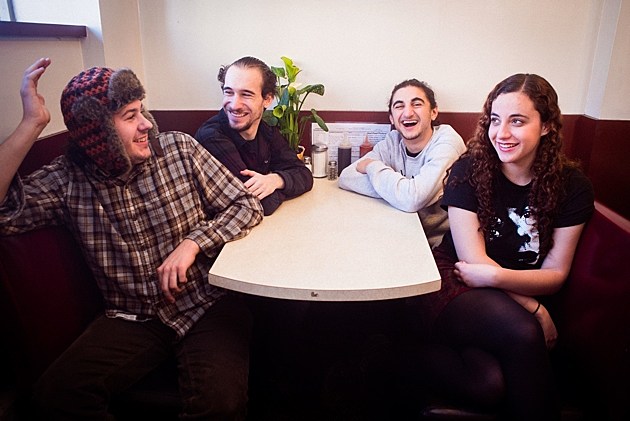 You guys can knock Tinder all you want, but apparently it's a totally great place to form bands. First Philly's Kississippi said they met that way, and now New Brunswick's ROMP have the same story. ROMP released their debut EP Sorry, Not Sorry this past fall, and they'll put out their first full length Departure From Venus on March 4. It comes out on vinyl/digital via Bad Timing Records (pre-order) and cassette via Funeral Sounds (pre-order). Like the EP, it was produced by Jesse Cannon, who's also worked with The Menzingers, Leftover Crack, Dalek and more.

We've got the premiere of the album's lead single "Last Year," which is up the indie/pop/punk alley that we've heard a good amount of lately. If you dig Swearin', Chumped, Cayetana, All Dogs, Bully or anything else like that (or OGs like that dog. and Veruca Salt), you're probably gonna like this too. Check out the song below.

The band have three NJ shows coming up. One is the Asbury Park stop of Mothers' tour tonight (1/28) at Wonder Bar (tickets); another is at New Brunswick's BoMA on Friday (1/29) with Mischief Brew, The Holy Mess, Alyssa Kai and Teenage Halloween (more info); and the third is at Hawthorne's Artisan Kitchen & Bar on March 5 with Prawn, Steady Hands, Messes, Plainview, Broken Beak and Sistine (tickets).