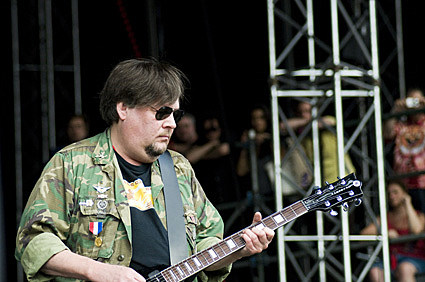 Famed rock-and-roll guitarist and longtime Ann Arbor resident Ronald "Ron" Asheton was found dead in his home on the city's west side this morning, police said.

Asheton, 60, was an original member of The Stooges, a garage-rock band headlined by Iggy Pop and formed in Ann Arbor in 1967. His personal assistant contacted police late Monday night after being unable to reach Asheton for days, Detective Bill Stanford said.

Officers went to the home on Highlake Avenue at around midnight and discovered Asheton's body on a living-room couch. He appeared to have been dead for at least several days, Stanford said. [Ann Arbor News]

Iggy Pop and The Stooges, Live in Cincinnati, 1970

Apart from The Stooges, Asheton also played in the bands The New Order (not the UK band of the same name), Destroy All Monsters, New Race, and more recently with Mike Watt, J. Mascis (of Dinosaur Jr.), Thurston Moore of Sonic Youth and Mark Arm of Mudhoney among others (as The Wylde Ratttz), on the soundtrack for the Todd Haynes film Velvet Goldmine, which starred Ewan McGregor and Jonathan Rhys Meyers. Asheton also acted, appearing with The Texas Chain Saw Massacre star Gunnar Hansen in Mosquito which came out in 1995 as well as in two other films, Frostbiter: Wrath of the Wendigo and Legion of the Night. [Wikipedia]