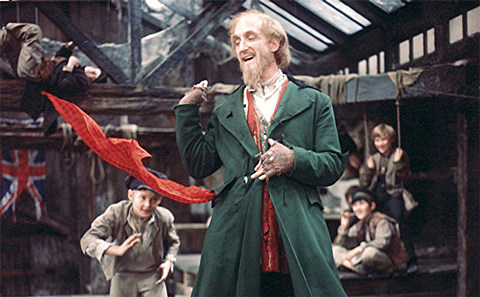 We've already said goodbye to a lot of people today, and here's more sad news. Ron Moody, best known for playing Fagin in Oliver!, died today (6/11) in London. He was 91. From The Guardian:

Moody was on his way to becoming a sociologist when he fell into acting. He got his first taste of show business aged 16 when he worked as a wages clerk at Elstree studios. He spent the second world war in the RAF before going on to study at the London School of Economics. Years later, he remembered: "While there, I got dragged into taking part in a student revue and ended up writing, and appearing in, a few sketches. In short, I got the stage bug."

He reluctantly auditioned for the role in Lionel Bart's musical that made him a star: "At first, I never wanted to do it. They told me there was this musical of Oliver Twist, so I went to see the Alec Guinness film, which I found to be so anti-semitic as to be unbearable.

"But Bart is as Jewish as I am and we both felt an obligation to get Fagin away from a viciously racial stereotype and instead make him what he really is - a crazy old Father Christmas gone wrong."

In addition to his role as Fagin, Moody appeared in many other movies and television shows and, at one point, turned down the role of Dr. Who. Rest in peace, Ron Moody. Watch his "You've Got to Pick a Pocket or Two" number from Oliver! below...