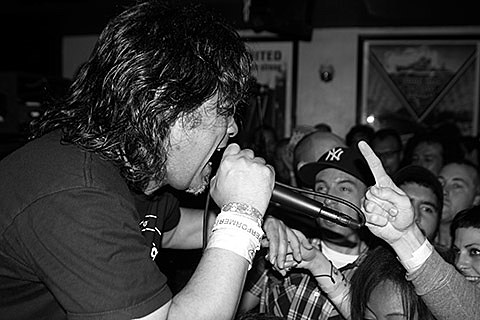 Today in Black Flag: Following vocalist Ron Reyes being fired, bassist Dave Klein quitting, and the band apologizing for "falling short in 2013" and replacing Ron with Mike Vallely on vocals, Ron has recently made more comments on the whole thing. A recent article on Beatroute reads:

"When I found out about Flag, one of the first things I said to Greg was, 'We must take the high road on this. Do not disrespect those guys in public. They have the public's support. People LOVE Keith Morris, people LOVE Chuck Dukowski, people LOVE Bill Stevenson. If we come against those guys we are going to look like bitter old men. Greg said, 'Fuck it. I am bitter.' He did it and it completely backfired. I didn't even know about Greg's lawsuit until the day it went public. Mike V told me. Once the lawsuit came out (August 2013) we were the Evil Flag. There was the Good Flag and the Evil Flag...it was really hard. When I started I was on good terms with those guys. All of a sudden they stopped responding to my emails. Relationships were severed and I was guilty by association.""

Until Greg Ginn allegedly threatened Ron Reyes' family, Reyes was committed to the band. He says he deserves an Academy Award for what he had to put up with in 2013. He admits Mike V was right when he told Rolling Stone "Ron became combative and argumentative," emphasizing, "That did happen only after Greg threatened my family." The reasons for the alleged threat are not known.

On November 24, 2013 Ron Reyes was fired from Black Flag after working in collaboration with Greg Ginn for one year. He had an album contract, but nothing for the tour or partnership in the band. He now admits without the paperwork, he doesn't have a leg to stand on for the money he is owed from the tour. He has made amends with his FLAG friends and is back at work with local band PIGGY.

Damn. Read the rest at Beatroute.