one of many films playing during the Rooftop Films summer season 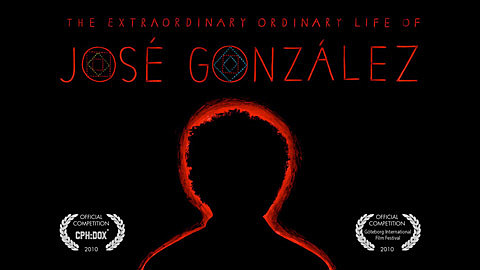 Rooftop Films have announced their initial 2011 movie screening schedule with events happening in NYC "every weekend from May 13th - August 20th." It's chockful of films - shorts and features, with subject matter as varied as wrestling, codependent lesbian space aliens, and a documentary on musician Jose Gonzalez. The films screen at "15 spectacular outdoor venues with stunning views across Manhattan, Brooklyn, Queens & The Bronx," and as you know, are usually paired with a live music performance.

The live entertainment lineup is still mostly TBA, though they're listing the bands Fishermen Three and Secret Mountains on dates TBD. They'll also have filmmaker Q&As, "a live wrestling match at the screening of Robert Green's Fake it So Real, featuring the semi-pro wrestlers from that film, and a sneak attack performance by the musical guerillas from the Swedish comedy The Sound of Noise." No word on whether Jose Gonzalez will also accompany the screening of his film.

Stay tuned for music lineup updates as they come, but check out all the films and dates and other stuff that has been announced, below... 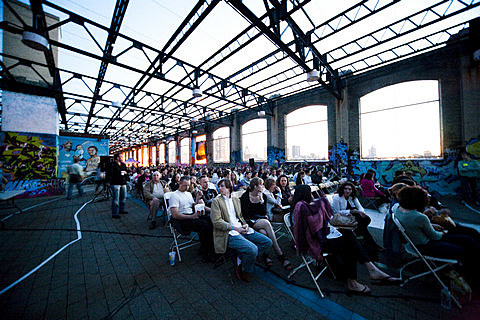 And now we just can't contain our excitement any more. It is our pleasure to announce the lineup for their 15th Annual Summer Series, presented by IFC and New York Magazine, featuring:

Over 50 shows: every weekend from May 13th - August 20th
23 feature-length films including 2 World Premieres and 15 US or NY Premieres
183 short films from 26 countries, shown in themed programs such as Romance Shorts, Thriller Shorts, and New York Non-Fiction
Fiction, documentary, comedy, drama, animation and more
15 spectacular outdoor venues with stunning views across Manhattan, Brooklyn, Queens & The Bronx
Live music, filmmaker Q&As, and after parties with complimentary drinks
Special events such as a live wrestling match at the screening of Robert Green's Fake it So Real, featuring the semi-pro wrestlers from that film, and a sneak attack performance by the musical guerillas from the Swedish comedy The Sound of Noise

Here's our schedule for May 2011:
(Our full schedule, with all dates, locations, individual short films and additional features will be announced soon.)

Saturday, May 14, 2011
Freeloader
(Zachary Raines | New York | World Premiere)
A special World Premiere of a new film by New York based filmmaker, Zachary Raines. A serious comedy following Frank, a feckless young man recently dumped by his girlfriend. In need of a place to stay, Frank moves from couch to couch, testing the patience of friends - and the kindness of strangers - until his luck runs out.

Thursday, May 19, 2011
Sound of Noise
(Ola Simonsson & Johannes Stfarne Nillsson | Sweden | NY Premiere)
A clever and maniacally entertaining Swedish comedy about a group of "musical terrorists" who break into hospitals, banks, and other public places to play compositions using the surroundings as their instruments. The screening will feature a special live performance by the musicians from the film.

Thursday, May 26, 2011
Short Film Thrillers: Trapped in the Machine
A selection of heart-racing, breath quickening, edge-of-your-seat films featuring all kinds of people and things struggling to break free.

Saturday, May 28, 2011
Bad Posture
(Malcolm Murray | Brooklyn, NY| US Premiere)
A nuanced, visually inventive vista of young life in Albuquerque, New Mexico, Bad Posture follows Flo as he seeks to make amends - and make a connection - with Marisa, a beautiful girl whose car his best friend has stolen.

Screenings continue every weekend from May 13 through August 20.

Our full schedule, with all dates, locations, individual short films and additional features will be announced soon. Additional 2011 Feature Selections include:

Green (Sophia Takal | Brooklyn, NY | Sneak Preview)
A haunting meditation on jealousy and the ways women manipulate and attempt to destroy each other.

The Extraordinary Ordinary Life of Jose Gonzalez (Mikel Cee Karlsson and Fredrik Egerstrand | Sweden | NY Premiere)
www.plattformproduktion.se
Shot over a three year period in José González's studio, at home and on tour, using a combination of video diary, surveillance camera, tour footage and animation, filmmakers Mikel Cee Karlsson and Fredrik Egerstrand provide a look into the life of one of Sweden's most interesting artists.

Family Instinct (Andris Gauja | Austria)
Family Instinct is a film about incest - social taboo and a violation of religious norms. The film provides extraordinarily intimate look into the lives of several people that live on the extreme margins of Latvian society, drawing you into a claustrophobic but compelling world that few viewers will have ever experienced.

Neurotypical (Adam Larsen | New York, NY | US Premiere)
www.neuro-typical.com
What is the standard that identifies one person as whole and capable and another as disabled and broken? Neurotypical parallels the lives of three individuals on the autism spectrum, each facing a pivotal stage of growth.

Convento (Jarred Alterman | New York, NY | NY Premiere)
convento.tumblr.com
With gorgeous, flowing camerawork filmmaker Jarred Alterman transports us into the world of Dutch kinetic artist Christiaan Zwanikken, who resurrects the deceased local wildlife by reanimating the skeletal remains with servomotors and robotic engineering. Christiaan Zwanikken and his robots will be there in person at the screening.

Fake it So Real (Robert Greene | New York, NY | NY Premiere)
fakeitsoreal.com
Filmed over a single week leading up to a big show, the film follows a ragtag group of independent, semi-professional wrestlers in North Carolina, exploring what happens when the over-the-top theatrics of the wrestling ring collide with the realities of the working-class South. The show will include a live wrestling match featuring the film's subjects before the screening.

At the Edge of Russia (Michal Marczak | Poland)
Alexei is a nineteen year old recruit being flown in to perform his military service on the frontier of northern Russia. The base is one of few such remaining outposts on the Arctic Ocean. There are five other seasoned and long serving soldiers stationed here, each with their own personal story or secret that has caused them to retreat from the real world. Their training and breaking in of the new arrival is sometimes humorous, at times harsh. Gradually, they each reveal something of themselves in their daily interactions and private moments as they continue their absurd duty in this snow covered no man's land, hundreds of miles from the nearest human settlement.

World's Best Dad (Joshua Gross | New York, NY | World Premiere)
www.worldsbestdadmovie.com
Miles hasn't seen Matt since their father passed away. Now, they're going to blast him into space. Once they steal his ashes. And figure out how to launch the rocket. And get him to Nevada...

Falling Overnight (Conrad Jackson | Los Angeles | New York Premiere)
www.fallingovernight.com
Falling Overnight tells the story of twenty-two year old Elliot Carson on the day before he has surgery to remove a brain tumor. Facing what could be his last night, Elliot's path intersects with Chloe Webb, a young photographer who invites him to her art show. Elliot welcomes the distraction and as the night descends, Chloe takes him on an intimate and exhilarating journey through the city. But as morning approaches, and Chloe learns of Elliot's condition, the magic of the evening unravels, and they must together face the uncertainty of Elliot's future.

New York Non-Fiction
Scratches, beats, and elegies from the city of cities.

Clermont Ferrand
Rooftop works with the world's premier short film festival to bring you a stunning selection of short gems from across the globe.

Kill Screen Video Game Night
Rooftop partners with the avante garde video game magazine Kill Screen to bring you an evening of short films that ask the question, "What does it mean to play games?"

Orbit (Film) (NY Premiere)
www.orbitfilm.com
A collaborative, feature-length omnibus movie about our solar system where every planet is represented by a short film. Co-produced by Rooftop Films and Cinemad.

Rural Route
A program of film offering city dwellers a glimpse of the rural life, where the grass is indeed greener. This program will be fittingly screened on a brand new Rooftop Venue: The Brooklyn Grange, an organic rooftop farm in Long Island City, Queens.

Industriance
Razor sharp short films about the changing industrial and agricultural landscape in urban and rural America and beyond.

Rooftop Shots
The official Closing Night of Rooftop Films 2011 Summer Series includes short films all about endings. Films so sharp we call them shots, fired from the roof one last time this year.