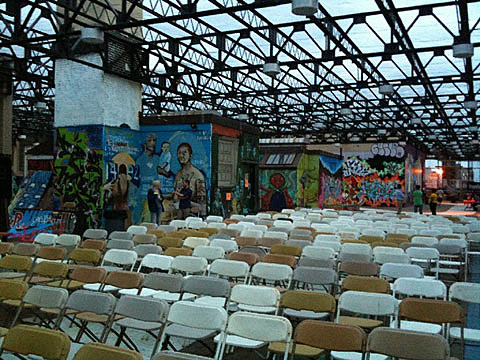 People packed into the chairs on the massive roof of the New Design High School in lower Manhattan in anticipation of the evening's theme - 'Hopelessly Devoted.' The weather was right, and the mood was ripe as Air's "Playground Love" rung out over the PA system and greeted the crowd.

Rooftop Films founder and artistic director Mark Elijah Rosenberg introduced the band of the evening with a big grin on his face, saying: "We are very pleased to present you with one of my favorite bands tonight. Give it up for Frances." (There was a reason for the wildly effusive introduction, as we would later learn.)

Frances may not be as hip as some of the other bands lined up to play for Rooftop Films this summer, but they also seemed more at home on stage than last week's season opener, Twin Sister. Frances played eight songs in total, including a number of new songs that lead singer and bassist Paul Hogan says they hope to record on a new album.

The roof of the NDHS is a hard space to play. It's wide open, spans three separate semi-walled off sections, and many people talk throughout the performance. But despite these potential setbacks, the pleasant indie pop of Frances, who played again Saturday night at Pianos with ARMS, was well-suited to Friday evening's romantic theme.

Interestingly, the event that got the biggest cheer from the audience wasn't the music... or the films. As Mark Elijah Rosenberg introduced the shorts for the evening, he called up his girlfriend, Stephanie Skaff (of Frances), and things got a little bit mushy. "I love you. I will always love you," said Rosenberg. Then, the inevitable: "Stephanie Skaff, will you marry me?" At this point, the shrieks from the audience were so loud that they overshadowed Skaff's response, so she leaned down into the mic, and said, "Of course I said yes!"

The films for the evening were a bit overshadowed by this dramatic proposal, but they were still fun to watch. In some ways, the romances on screen seemed less scripted than the real-life proposal. The six shorts covered everything from "the best/worst first date ever," to kissing cousins, lovesick octopi, and a group pilgrimage to Iowa in the name of gay marriage. Two directors were also present - Gillian Robespierre ("Obvious Child) and Cody Stokes ("Heartland Transport").

Spike Jonze's eagerly anticipated Absolut-sponsored short "I'm Here" is a delightful - if not a bit sad - story of a devoted (robotic) boyfriend who is willing to sacrifice it all for his clumsy robotic girlfriend. Besides looking fantastic, it also has a pretty killer soundtrack. Songs by Of Montreal, Animal Collective, Girls, and Aska (of Moonrats) all factor into the score. You can stream Jonze's short in its entirety (35 mins) at its website. The trailer is below.

Another standout short was "Obvious Child," which features new SNL cast member, Jenny Slate. "Obvious Child" tells the awkward and surprisingly comical story of a bad break-up, a drunken hook-up, and the unplanned pregnancy that ensues. Watch that in its entirety below.

The evening concluded with free drinks at Fontana's, and I can't help but wonder if anyone took Rosenberg's advice and made a move.

Rooftop Films happened again on Saturday at the same venue, and that's where it will be again this Friday (5/28) and Saturday (5/29). Thursday you can catch them in Brooklyn w/ a performance by Natureboy.