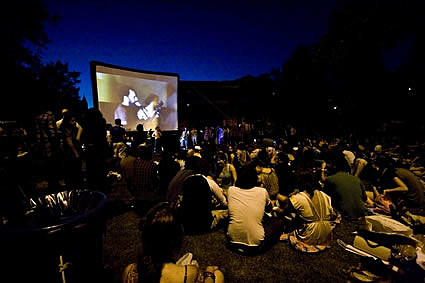 The Rooftop Films 2009 Summer Series returns for our 13th season, screening every weekend from May 15 - September 20. This summer, Rooftop will host more than 40 unique outdoor events, featuring programs of new, independently produced films from around the world paired with New York's best and brightest musical acts. [press release]

Rooftop Films kicks off its summer of music + films with a program entitled This is What We Mean By Short Films on Friday, May 15th on the roof of the Open Road Rooftop (350 Grand St) in Manhattan. On hand for the opening will be the band Cymbals Eat Guitars. Tickets are on sale.

Last summer, Rooftop started off June 6th with a program at Open Road Rooftop that featured now-defunct Brooklyn band Dirty on Purpose. Other program highlights (on the music side) from 2008 included Phosphorescent, O'Death (photo above), Deer Tick and others.

Cymbals Eat Guitars recently canceled some of their upcoming shows, including planned NYC gigs at Cameo on May 8th and an appearance at Santos Party House's DKMS benefit on Saturday, May 9th.

Cymbals Eat Guitars' first show since the cancellations will be the Rooftop Films event. Also coming up for the band is a Sunday, May 17th show at Glasslands, an opening spot for White Rabbits at the Bowery Ballroom on Thursday, May 21st, and a show at Southpaw on Wednesday, May 27th. Tickets for the White Rabbits show are still on sale.

Full Cymbals Eat Guitars message and tour dates, plus details on the Rooftop Films opening, with a video of Rooftop's '08 Animation Block Party featuring Plushgun, below...

Rooftop Films Opening Night Party: This is What We Mean By Short Films with Musical Guests Cymbals Eat Guitars

Rooftop Films is back and we're starting the summer early. The Rooftop Films 2009 Summer Series kicks off on Friday, May 15th. Head to the Lower East Side and follow the crowds up to the Open Road Rooftop Project to see extraordinary live music performances and amazing films under the warming sky, framed on all sides by the greatest cityscape in the world.

The Rooftop Films 2009 Summer Series returns for our 13th season, screening every weekend from May 15 -September 20. This summer, Rooftop will host more than 40 unique outdoor events, featuring programs of new, independently produced films from around the world paired with New York's best and brightest musical acts. We'll be in more than a dozen spectacular outdoor locations around New York City and anticipate over 25,000 attendees throughout the summer.

On Friday, May 15 the Rooftop Films Summer Series opens with the shorts program, "This is What We Mean by Short Films" at the Open Road Rooftop above New Design High School (Lower East Side). These are the movies that define the short film as a genre--quickly clever but profoundly rich, packed with hard-hitting humor and long-lasting poignancy.

Before the films, Sound Fix presents Cymbals Eat Guitars. The Staten Island rockers have been getting a lot of attention for their first self-released album Why There Are Mountains and were just named "Best New Music" by Pitchfork (Read the REVIEW). And after the films, everyone in attendance is invited to the Rooftop Films after party at Fontana's where we will be serving complimentary Radeberger Pilsner until 1 AM and hanging out with the filmmakers and the band.

Our dear friend and bandmate Dan Baer has recently been admitted to the hospital with a potentially life threatening condition. As a result we've decided to cancel the shows we have scheduled through Sunday April 19th, in order to be by Dan's side. We will keep you posted as we know more. We appreciate your support and understanding during this time.