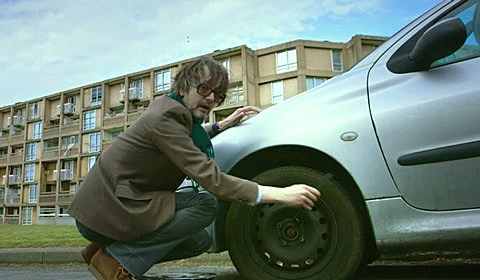 If you're a Pulp fan you probably already know that you've got two upcoming chances in NYC to see Florian Habicht's excellent and very entertaining documentary PULP: A Film About Life, Death & Supermarkets. It's screening August 6 at Lincoln Center with a Habicht post-show Q&A as part of the venue's Sound + Vision fest (tickets); and then Rooftop Films on August 7 (Industry City in Sunset Park location) with a post-screening Q&A with Jarvis Cocker and Habicht (tickets). If you'd like to go to the Rooftop Films screening/Q&A for free we're giving away a pair of tickets. Details on that are below.

The Rooftop Films screening just got a little more interesting. Before the screening, the good folks at Mondo NYC will be DJing, and immediately after the Q&A there will be a Pulp karaoke contest judged by Jarvis and Habicht. To enter, you need to Tweet to @RooftopFilms saying which Pulp song you'd like to do with the hashtag #singforjarvis, and plead your case. Song selections and more details here but they do suggest maybe you might want to pick a song besides "Common People." Too band "Bad Cover Version" isn't an option -- too meta?

Trailer for the film and the "Bad Cover Version" video below...

======================
For a chance at winning a pair of tickets to see the Pulp Documentary at Rooftop Films: either tweet something that includes both @BrooklynVegan AND "PULP DOC" in the tweet, or send an email to BVCONTESTS@HOTMAIL.COM with the subject line "PULP DOC". Include your first and last name in the email. We'll pick a winner at random and contact them with more details. If you enter by email, it will not be shared with anyone else. Good luck!
======================