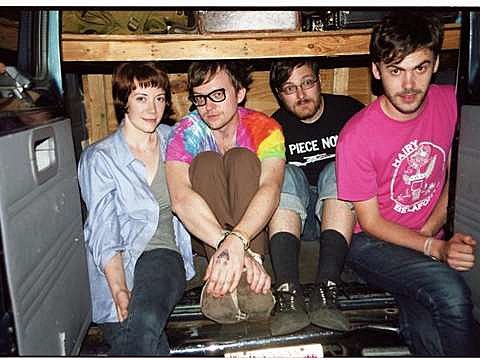 It's been two years since Lawrence, KS' Rooftop Vigilantes last headed to the East Coast and about a year since we got new recorded material, but we're about to receive both. The band have an upcoming split single with Mannequin Men and you can download one of RV's two contributions to it above or stream it below. Like most of what they do, "Automatic Trash" packs in an amazing ammount of hooks, melody, and harmonies into two minutes and is may recalls the singalong pop of early Elvis Costello or The Replacements. Look for a new album, Weird Adventure, to hit later this year or early 2013.

And, yes, the band are going on tour, hitting the Midwest and East Coast, including four NYC stops: Cake Shop on September 7, Otto's Shrunken Head on September 8, Shea Stadium on September 9 and Death by Audio on September 10. The band bounce off the walls when they play and are a lot of fun live, so do try to get to one of these shows.

UPDATE: The Shea and DbA shows aren't happening but they will play Legion on September 11.

A list of all tour dates, and streams of their new single and their last album, Real Pony Glue, are below.