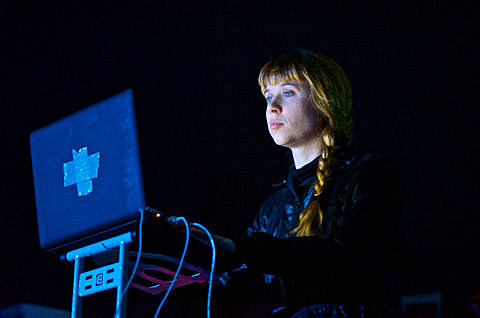 On November 4, Le Poisson Rouge is teaming up with Wordless Music to present a pretty cool bill that should appeal to fans of indie/classical crossover. The show will be headlined by vocal octet Roomful of Teeth (who have worked with tUnE-yArDs), who will be performing the world premiere of Caroline Shaw's "Partita," in addition to works by Caleb Burhans, Brad Wells, and William Brittelle. Opening the show will be experimental musician Holly Herndon, whose newest album, Movement, was released last year via RNG Intl. Tickets for the LPR show are on sale now.

Holly is also taking part in Ecstatic Summer 2013, which happens at Brookfield Place Plaza on Saturday (6/29) and Sunday (6/30) as part of the River to River Festival. There will be premiere compositions from Holly, Greg Saunier (Deerhoof), Reggie Pace (Bon Iver), Dave Douglas, Susie Ibarra, Seth Olinsky (Akron/Family), People Get Ready, and Son Lux. The pieces will be performed by members of The National, yMusic, Plastic Ono Band, and more. Like all RIver to River events, this one is free and open to the public. 5 PM start. Check out the full list of compositions being premiered, below.

In related news, Wordless Music is also presenting the previously discussed Oneohtrix Point Never show happening in NYC on September 17 at Our Lady of Lebanon Maronite Cathedral (113 Remsen St). OPN is releasing his new album, R Plus Seven, on September 30 via Warp, and he recently revealed an excerpt of a new song, "Still Life." You can listen to that below.