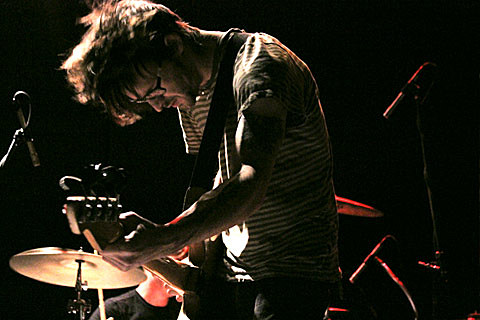 Baltimore rippers Roomrunner wrapped up their run with Marnie Stern over the weekend. They didn't play her NYC show, but they did play her Chicago show, and instead opened for Pissed Jeans in NYC. Now the band have more dates scheduled, three of which are in NYC.

The first is the previously discussed free WBAR-B-Q at Barnard College on Saturday (4/27) with Waxahatchee, Twin Sister, Swearin', Speedy Ortiz, and more. Then they'll headline a gig at Death by Audio on May 14 (openers TBA, admission is $7 at the door). Finally, in June they'll support a few dates on the previously announced Mikal Cronin and Shannon and the Clams tour, including the NYC show on June 20 at Bowery Ballroom. Tickets for the Bowery Ballroom show are still available.

UPDATE: We've been told that Roomrunner have cancelled the Death by Audio show and pushed back the release date of their album from 5/14 to 5/28.

The Death by Audio show serves as a record release show for the band's debut LP, Ideal Cities, which is due out the day of the show (5/14) 5/28 via Fan Death. The album has the clearest production of anything the band has put out to date, but it's far from overly polished. Guitar riffs pile on top of each other in a Siamese Dream/In Utero sort of way, putting Roomrunner in a league of other current bands like California X and Milk Music that actually make the term "grunge" sound appealing again. But while those bands often channel the swampy sounds of Dinosaur Jr and Meat Puppets, Roomrunner's after something brighter. Singer Denny Bowen sings with a nasally pop punk sneer and the album's got some of the band's biggest hooks yet.

Check out the video for Ideal Cities single, "Weird," along with all tour dates, which are listed below...