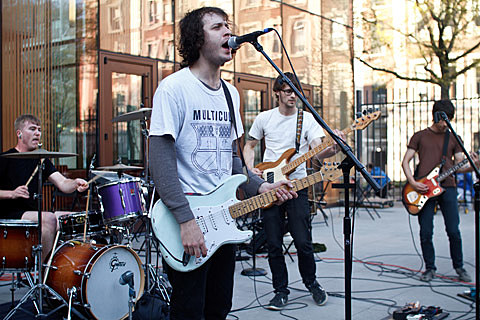 As mentioned, Baltimore's Roomrunner are releasing their debut LP, Ideal Cities, next week (5/28) via Fan Death, but you can now listen to it ahead of its release date at SPIN. When last writing about the album, I said:

The album has the clearest production of anything the band has put out to date, but it's far from overly polished. Guitar riffs pile on top of each other in a Siamese Dream/In Utero sort of way, putting Roomrunner in a league of other current bands like California X and Milk Music that actually make the term "grunge" sound appealing again.

As mentioned, they'll be playing a few dates in June with Mikal Cronin (who is touring in support of his excellent new LP, MCII) and Shannon and the Clams, including the NYC show happening on June 20 at Ballroom (tickets). Around that time, Roomrunner will also play a record release show on June 13 at Death by Audio, where they were initially supposed to play a release show in May but cancelled.

Updated dates are listed, along with a video of them playing "Bait Car" at Death by Audio, below...