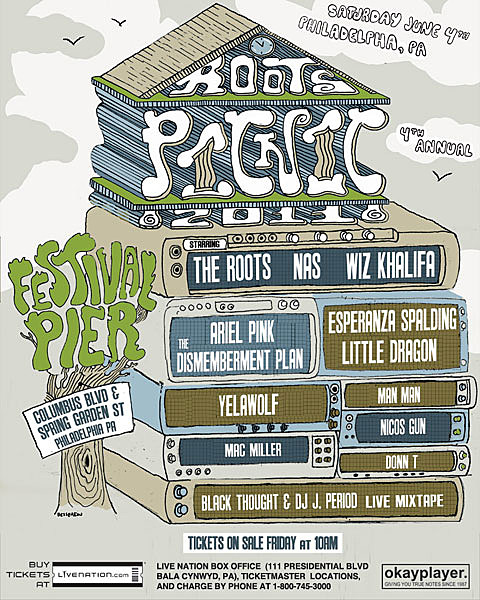 Tickets On Sale This Friday, March 4 at 10am!

PHILADELPHIA - Today, the Legendary Roots crew announced the 4th annual ROOTS PICNIC will take place at Philadelphia's Festival Pier at Penn's Landing on Saturday, June 4th. The Picnic is one of the hottest shows of the summer, curated entirely by The Legendary Roots Crew to create a unique, genre-bending all day festival in the city of Philadelphia that boasts multiple stages, eclectic collaborations and the latest and greatest of what music has to offer. This year the main stage will have sets from The Roots, Nas (with The Roots), Wiz Khalifa, Esperanza Spalding and more.

Beloved Philadelphians The Roots are among music's elite and continue to garner critical acclaim with their every move. This year they snagged up three more Grammys to add to their already packed trophy case. They're also one of the busiest bands around and when they're not performing a show or in the studio, The Roots can be seen every week night as the house band on "Late Night With Jimmy Fallon".

After having Public Enemy and Wu Tang members play backed by the Roots at the Picnic in '09 and '10, you need an artist of tremendous stature to back those performances up. Nas is that guy - a man many consider one of the top MC's in the history of the game. From his brilliant 1994 debut Illmatic, to his mainstream success with It Was Written, to his anthemic ability to tell stories, educate and perform, Nas is the stuff of rap legend. This could go down as the greatest performance at the Roots Picnic ever.

Pittsburgh native Wiz Khalifa may be newer to the scene but has established himself as one of the rap game's brightest young stars to watch. The artist behind "Black & Yellow" embarked on a stint on the famed "Rock The Bells" tour alongside such legends as Lauryn Hill and Snoop Dogg, which was immediately followed by his nation-wide headlining tour and performing at Bonnaroo and Bamboozled.

Bassist, vocalist, composer and Grammy Award winner Esperanza Spalding is making her second trip to The Roots Picnic, after blowing the crowd away in 2009. Since her 2008 release of Esperanza, which went on to become the best selling album by a new jazz artist internationally and top the Billboard's Contemporary Jazz chart for over 70 weeks, Spalding has not slowed down. Last year, she released Chamber Music Society, which sets her on an upward trajectory to prominence, which culminated by winning a Grammy for best New Artist this year.

Last year's Picnic was a sold-out affair -- among the highlights was the generous serving of The Roots playing back-up band to John Legend and then with Wu Tang Clan's Method Man, Ghostface Killah and Raekwon. In previous years performers have included TV on the Radio, Vampire Weekend, Public Enemy, The Black Keys, Santigold, Gnarls Barkley, Kid Cudi, Sharon Jones & the Dap-Kings and many more.

Tickets go on sale this Friday, March 4 at 10am and will be available at LiveNation.com, Live Nation Box Office (111 Presidential Blvd, Bala Cynwyd), Festival Pier (Columbus Blvd & Spring Garden St, Phila / day-of-show only) or by-phone at 800-745-3000.