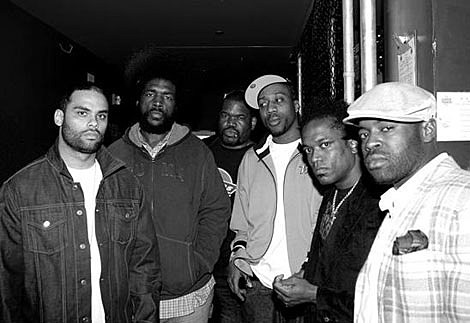 The Roots announced the line-up for their 2nd annual "Roots Picnic" in Philly...

The Roots (2 sets), TV on the Radio, The Black Keys, Public Enemy (who will perform It Takes A Nation Of Millions To Hold Us Back, backed by Antibalas and The Roots), Antibalas, Santigold, Busdriver, and Dirty Magazine featuring Zoe Kravitz.

Questlove-founded site Okayplayer is running a pre-sale with $5 off tickets (using password 'EARLYBIRD') until Thursday (3/19) at 10pm. Then the general sale starts Friday (3/20) at 10 am.

In addition to being the new band for "Late Night with Jimmy Fallon," The Roots play at Highline Ballroom tonight (3/19) as part of the band's ongoing series of gigs at the venue. Beginning next week Questlove will host his own Thursday night residency at LPR through May 28th. More information on those and other shows in our previous Roots rundown.

Down at SXSW, half of The Black Keys (a.k.a. Dan Auerbach) played last night (3/18) - you can still catch him at Bill's Place on Friday, March 20th and at The Mean Eyed Cat for a Saturday (3/21) afternoon show.

Full press release and poster, plus Public Enemy with The Roots and Antibalas playing "Bring The Noise" on "Late Night with Jimmy Fallon" below... 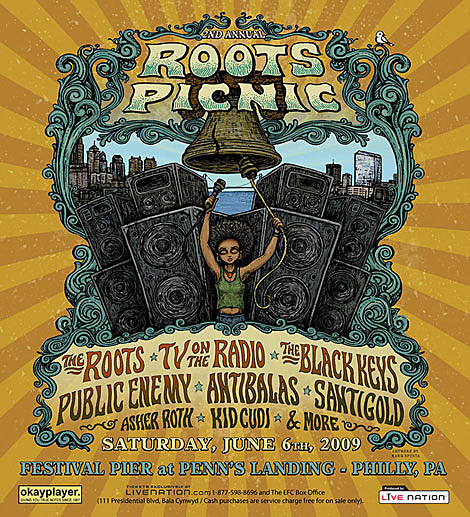 The Grammy-Award winning hip-hop stars and newly minted house band of "Late Night With Jimmy Fallon," have recently been called "the flame keepers of hip-hop authenticity" by the New York Times. Known for their incessant touring, mind-blowing live shows and conscious and creative lyricism, the Roots will perform two sets of their impeccable live sound at the Picnic.

And in a very special performance, Public Enemy will perform It Takes a Nation of Millions to Hold us Back along with Antibalas and The Roots - the first time this album will be recreated backed by a live band. Q Magazine summed up It Takes a Nation best when they said, "5 stars. Indispensible - the greatest rap record of all time. A landmark. A classic."

The Black Keys are an American blues-rock music duo consisting of vocalist/guitarist Dan Auerbach and drummer/producer Patrick Carney. Their latest album ATTACK and RELEASE was produced with Danger Mouse. The band recently performed two sold-out shows at Electric Factory as part of their most recent tour.

Santigold (formerly known as Santogold) was easily one of 2008's most exciting breakout artists. Her album and singles "Creator" and "L.E.S Aristes" were smash hits with critics, fans and artists wanting more as she hit stages and records with artists as diverse as Jay Z, Coldplay, Bjork, MIA, Beastie Boys and many more. Recently featuring on the opening week of JIMMY FALLON - Santigold attended high school in Philadelphia and spent time performing as the lead singer of the punk band STIFFED.