The Roots on the Intrepid (more by Dominick Mastrangelo) 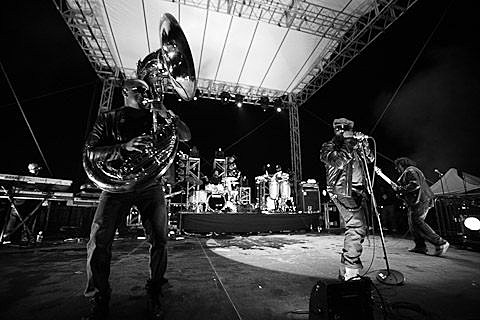 The Roots and "special surprise guests" will celebrate the holdays at their 5th Annual Okayplayer Holiday Jam, which goes down at Brooklyn Bowl on Thursday (12/15), followed by the usual Questlove DJ stint shortly thereafter. The show is private, but you (and a guest) can win a special invite by signing up for the Okayplayer newsletter. Further details are at the Okayplayer site.

The Roots will also celebrate legendary delta blues musician Robert Johnson's 100th birthday at the Apollo on March 6th, joining a lineup that includes Shemika Copeland, Bettye LaVette, Taj Mahal, Keb Mo, Sam Moore, Todd Rundgren and more TBA. Tickets are on sale, and the show will double as a benefit for the construction of the Blues Hall of Fame by the Blues Foundation in Memphis.

The Roots recently celebrated the release of their new LP Undun and inddirectly called Michelle Bachmann a "Lyin' Ass Bitch" (and will no longer have carte blanche on the songs they play as a result).

Video of Questlove and Black Thought from Power 105 this morning discussing the Michelle Bachmann incident, as well as the concept behind Undun is below...